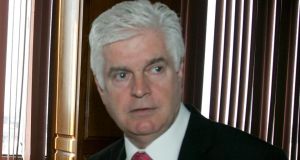 The controversy over how millions of euro in State funding ended up in a bank account controlled by two individuals associated closely with Siptu has caused damage to the trade union and hurt its members, its general secretary has said.

Addressing the Dail Public Accounts Committee today, Joe O’Flynn said it was an event in the union’s history that conflicted with the enormous positive contribution made by its members in the development of a modern economy wherer rights were respected and dignity of work was paramount.

The committee is holding a hearing into areport drawn up by the Comptroller and Auditor General which found that over €4 million in funding from a variety of State bodies and organisations was paid into an account known as the Siptu national health and local authority levy fund.

The report found that around €600,000 had been spent on paying for a number of foreign trips undertaken by trade union officials, p ublic servants and others.

Mr O’Flynn told the committee that no grants had been paid by State bodies to the union corporately and nor had funding been provided to it from the bank account.

However, he said there were “a number of transactions over the years between the fund and branches and other units of the union to the value of €68,000 in total”.

Mr O’Flynn said that there had been concern raised at aprevious committee hearing in December 2011 surrounding two payments of €190,000. However, he said it had subsequently transpired that these payments had never actually been made and that no money had gone missing.

He said that the union had refunded around €1 million in public funds that remained inthe bank account to the exchequer.

Mr O’Flynn said that the various State bodies which provided funding should have had a responsibility to ensure they had service level agreements on how the money should be spent as well as proper over sight arrangements.

He said it was incomprehensible as to why these arrangements were not in place.

Mr O’Flynn said there should also have been a responsibility on the fund administrator - who was an employee of the union - to keep proper books of account.

“No income and expenditure statements werecompiled or requested by the funding agencies. Unquestionably, there also should have been greater controls in our organisation in respect of the setting up of such funds and their oversight.”

“We did not know the manner in which this account operated. We should have known.”

Mr O’Flynn said Siptu had now changed its rules and established an external review of its financial procedures to ensure that this never happened again.