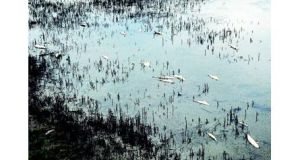 A file image of a fish kill. Inland Fisheries Ireland is investigating a kill upstream of Old Bawn bridge on the Dodder river in Tallaght, Dublin.

A significant fish kill on the river Dodder in Dublin is being investigated.

Inland Fisheries Ireland is investigating the matter and taking samples at the scene of the kill upstream of Old Bawn bridge in Tallaght.

IFI said it is confident it has established the source. But officials would not comment on the cause of the incident, which is believed to have been from a discharge of industrial waste or dumping.

A spokeswoman confirmed about 500 various types of fresh water fish were killed over a 600m stretch of the river.

“We are confident we know the source but we are continuing our investigations. We won’t be releasing information on the source until we are absolutely certain of the results or after a prosecution,” she said.

Secretary of the Dodder Anglers group Redmond O’Hanlon said it was not yet known what had caused the kill and that it was shocking to see so many fish dead.

“It’s the worst in 30 years,” he said. The matter had first been noticed at between 4pm and 5pm yesterday evening, he added, estimating dead fish had been seen over a long stretch of the river.

He said significant numbers of dead fish could be seen on either side of the bridge at the Old Mill pub.