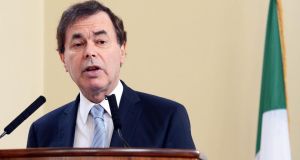 Minister for Justice Alan Shatter: told a Lebanese newspaper that it is not a “valid distinction” to differentiate between Hizbullah’s political and military wings

While some individual member states have recognised Hizbullah as a terrorist group, the EU as an entity has not. The Obama administration has lobbied the EU on the issue. On a visit to Dublin last October, President Barack Obama’s chief homeland security adviser John Brennan, recently confirmed as the CIA’s new director, chided Ireland for its failure to designate Hizbullah.

The Netherlands has placed Hizbullah on its terror list, while the United Kingdom distinguishes between its political and military wings, proscribing the latter as a terrorist organisation.

In an interview with the Beirut-based Daily Star newspaper to coincide with his current tour of Middle East countries, including Israel, Mr Shatter said he did not consider that a “valid” distinction.

“I think Hizbullah is a single organisation,” he told the paper, adding, “it doesn’t reflect . . . the structure of the IRA where the IRA, or Provisional IRA, was a military wing and Sinn Féin was a political wing”.

The Minister noted that the question of designating Hizbullah “remains to be considered” by Eu ropean justice ministers. The matter “would have to be weighed up very carefully so the right decisions are made”, he said, noting Hizbullah is “a group that participates in democratic elections in Lebanon, that has a role in the Lebanese government, that plays a very major role in the politics of Lebanon”.

The Department of Foreign Affairs declined to comment on whether Mr Shatter’s remarks on the UK’s differentiation between Hizbullah’s political and military wings marked a departure from the Government’s position.

“That position has not changed,” a department spokesman said. “If there is a formal proposal at EU level to designate Hizbullah, then Ireland as current EU presidency will convene a meeting of the relevant working group in Brussels and ensure that all necessary consideration is given to the proposal and to the evidence provided.

“It would be for the EU Foreign Affairs Council to decide on what action to take, based on a recommendation from the working group. The Government has not taken a position on any such proposal.”

The debate on an EU-wide designation for Hizbullah was reignited after Bulgaria linked the organisation to a bombing which killed five Israeli tourists and a Bulgarian in that country last year.

Ireland hosted a meeting of EU justice ministers in January during which Bulgaria briefed attendees on the progress of its investigation into the attack last July. In his comments in Lebanon, where he was on an official visit, Mr Shatter noted that the Bulgarian inquiry is ongoing and added that no decisions should be made before its outcomes are known.

He told the Daily Star that it was “important. . . that the Bulgarian authorities complete their investigation, and that we don’t jump to conclusions.”