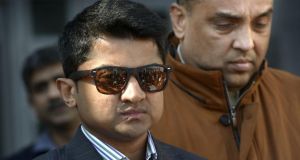 Praveen Halappanavar said he has has been receiving mail telling him to leave the country. Photograph: Brenda Fitzsimons/The Irish Times

He said the widower, whose wife Savita died after being denied an abortion as she suffered a miscarriage in hospital in Galway last year, has been through enough and urged people to leave him alone.

“Praveen Halappanavar has had enough to endure over the course of the last period of time without having to endure the depraved attitudes of people who are just being hurtful,” Mr Gilmore said.

“There is no justification, and I would call on those who are engaged in that to stop it immediately.”

Mr Halappanavar had earlier said he received abusive mail from a number of campaign groups in recent months.

He said one particular group, which he did not name, has been sending him abusive messages.

He is set to take legal proceedings against Galway University Hospital over Savita’s death from septicemia while in the hospital in October last year. She was around 17 weeks pregnant at the time.

“Savita’s father and the whole family are very angry. They want to take legal proceedings against the hospital. We want to get to the bottom of the truth. The HSE report is nowhere near it”.

“We pushed for a public inquiry which never happened, so we see this as the only option left to us at the minute.

Mr Halappanavar said be believed Savita would have wanted him to take the legal route.

“She was that kind of a person who always had a million dollar smile on her face. She always wanted good things to happen to everyone around her. We don’t want any woman to suffer the way Savita did.

“I’m very optimistic. All the family is behind me and also the people of Ireland. I have been very fortunate to have some amazing friends around. They are all backing me up to get to the bottom of the truth.”

Mr Halappanavar is set to meet Minister for Health James Reilly next week. He said he will tell Dr Reilly he thinks the HSE report is a whitewash.

“I will say [to Mr Reilly that] it is whitewash and all the family is very disappointed and shocked,” he told RTE’s Miriam O’Callaghan on radio yesterday morning.

Mr Halappanavar said it was stressful to receive word that the report was to be released the night beforehand, when he was set to spend time with family.

He has been keeping Savita’s parents in India informed.

“He [Savita’s father] had a copy of it and he said he can’t read it so he asked me [FOR A ]synopsis of the report, so I had to tell him it’s more a recommendation to the hospital rather than determining the cause of death. He was very upset with that.

“I said I can see the bright days ahead, but there’s nothing happening since then. We wanted to get to the bottom of the truth. Someone has to answer why she died. I haven’t got an answer yet.

“Every day I pray and I keep asking why did this happen. The tough time the whole family had to go through.”