Plus: Cast your vote to tackle a major European problem 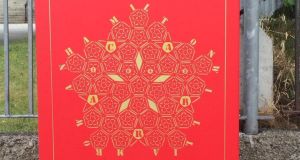 Art by Rob Doyle on a traffic light box in Cabra, inspired by a game Hamilton invented

When William Rowan Hamilton etched the formula for quaternions into Broombridge at Cabra one October morning in 1843, his act of graffiti made a major mark on mathematics.

The four-dimensional quaternions he described have since enabled developments in telecommunications, computer and movie animation and even space travel, but it doesn’t stop there.

The 19th-century mathematician has also inspired artistic portraits and illustrations, sculptures, stamps, poetry, documentaries and literature (James Joyce and Myles na gCopaleen both mentioned Hamilton’s work). Hamilton even has a golf hole and a moon crater named after him, says Dr Fiacre Ó Cairbre, who organises an annual walk to retrace Hamilton’s footsteps along the Royal Canal.

“Hamilton’s story is a great example of something from the history of mathematics that continues to inspire people,” says Ó Cairbre, a senior lecturer in mathematics at Maynooth University.

Ó Cairbre recently collaborated with Dómhnal Ó Bric on an illustration of Hamilton in a space suit standing beside Lara Croft (of Tomb Raider fame) while scratching his inscription into the bridge: the piece is called One Small Scratch for a Man, One Giant Leap for Mathematics.

Hamilton also inspired Cabra-based Rob Doyle, who saw that Dublin City Council was seeking people to paint traffic-light boxes, and he wanted to celebrate Hamilton on a local box.

“Hamilton had invented a game called the Icosian game, so the shape of the Icosian game is the basis for the stencil,” he says. “It also luckily turned out that the total number of faces around the perimeter of the final design equated to the number of letters it took to spell out Hamilton’s full name.”

If you could plough investment into research to tackle big societal questions, what would those questions be?

The European Commission wants to know. Together with the European Investment Bank Institute it is gearing up to offer a €2 million Horizon Prize for Social Innovation to “whoever can offer the best breakthrough that will help meet a problem facing society”, and a popular vote will decide which problem is to be tackled.

Horizon Prizes seek to induce research that can help meet a defined challenge, and contestants are free to come up with the most promising solutions.

In 2015, five Horizon Prizes worth a total of €6 million are being launched for health, environment and ICT under Horizon2020, the European Union’s research and innovation programme, and topics include better use of antibiotics, materials to promote clean air in cities and better ways to measure food intake.

For the social innovation Horizon Prize in 2016, the Commission wants the public to decide on the area to address. Until October 21st you can go online and choose from a menu including childhood obesity, the ageing population, integration of immigrants in the labour market, removal of barriers to women-led enterprises, and putting citizens “in the driving seat” for more sustainable, clean and safe energy.