So-called ‘drilling’ teaching methods may be unpopular nowadays, but they have been proven effective 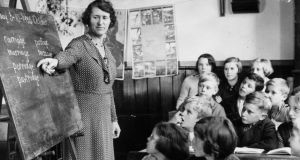 The traditional teaching method, unfashionable since the 1960s, focuses on explicit instruction of the students by the teacher. Photograph: Richards/Fox Photos/Getty Images

Education is expensive. Some 16.5 per cent of the gross current Irish budget is spent on education, the third-biggest spend after social protection (39.7 per cent) and health (26.6 per cent). It is crucial, therefore, to ensure the education budget is used to promote the most effective teaching methods.

This does not seem to be the case.

The “inquiry-learning” approach has become increasingly popular, particularly in first- and second-level teaching. Inquiry learning is far less effective than the traditional explicit teaching method, as demonstrated by a preponderance of scientific studies. Nevertheless, mainstream educationalists seem to be largely guided by traditional philosophical notions rather than scientific evidence.

I raised this important topic here on March 5th and identified a fundamental flaw in inquiry learning. I revisit it today because of widespread concern at university level about the educational attainments of incoming students from second level, as expressed, for example, in an article in The Irish Times on May 11th by Prof Ted Hurley of NUI Galway’s mathematics department.

The traditional teaching method, unfashionable since the 1960s, focuses on explicit instruction of the students by the teacher, who outlines the established body of knowledge that is the topic of the lesson, works through sample problems, asks questions of the students and maintains their focus, and asks them to apply the concepts while the teacher supplies corrective feedback and strives to ensure that all students learn the essentials.

Although not all explicit teaching is equally effective, plenty of research-based evidence supports its general effectiveness (for example, Barak Rosenshine, American Educator, 2012). But, instead of enthusiastically fine-tuning explicit teaching to make it even more effective, explicit instruction has become unfashionable, often referred to pejoratively by educationalists as “drilling”.

There is little evidence to demonstrate the effectiveness of inquiry learning, and controlled experiments have shown this approach is less effective than explicit instruction methods such as worked examples (for example, John Sweller and Graham Cooper, Cognition and Instruction, 1985). However, a small amount of inquiry learning might usefully complement explicit instruction, but only at senior second level.

A recent OECD report (Andreas Schleicher, Schools for 21st Century Learners, 2015) assumes inquiry learning is the superior method to develop “21st-century skills” such as critical thinking and creativity. But this assumption flies in the face of the fact that in order to think critically about something you must first learn a lot about the subject.

Teaching methods are formulated by educationalists who, although acting in good faith, remain influenced by intuitively appealing philosophical notions that have little empirical foundation. John Dewey (1859-1952) and other educational philosophers were impressed by the natural development of the child, for example how children automatically learn language through immersion in the language.

They concluded that learning is natural and the teacher’s role is to unobtrusively facilitate this natural unfolding of learning in the child. But, it seems to me, this conclusion is based on a misinterpretation.

Natural selection had sufficient evolutionary time to incorporate an automatic programme for language acquisition into human development. However, practices such as writing, mathematics and science arose too recently in human history for natural selection to programme their automatic learning into our natural development. These skills are unlikely to emerge in most children through immersion only, and are appropriately acquired through explicit learning strategies.

I believe educationalists are making a costly mistake by not according a privileged position to scientific evidence and not reforming teaching methods in the light of this evidence. Testable scientific hypotheses should guide future developments in teaching.

William Reville is an emeritus professor of biochemistry at UCC, undersci.ucc.ie