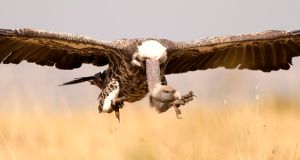 Zoologists at Trinity College Dublin have come up with the idea of creating ‘restaurants’ for vultures to protect the specis against habitat loss, poisoning and other threats. Photograph: Darcy Ogada.

How do you reverse a massive decline in the numbers of African white-backed vultures that threatens the species? You open a vulture restaurant of course.

This is the idea being supported by zoologists from the School of Natural Sciences at Trinity College Dublin. Shrinking habitats and a decline in natural prey have left these iconic birds under serious threat.

West Africa has seen a 95 per cent fall in numbers and the Maasai Mara National Reserve has lost about 62 per cent of its vultures, say Dr Andrew Jackson, assistant professor in zoology and Adam Kane, both at Trinity and authors in a study published online in the journal Animal Conservation.

It might seem incongruous to haul a carcass out onto the savannah to feed hungry vultures, but what is the difference between that and our willingness to put out nuts and seed to feed the birds closer to home, says Kane.

The birds are in decline due to a range of threats including accidental or intentional poisoning, wind turbines, electricity pylons, prey poaching and habitat destruction, the researchers say.

Vultures don’t tend to claim a place close to our hearts given they will eat nearly anything and suffer from a lack of cuteness. They usually end up portraying baddies in children’s cartoons, which does nothing for their reputations.

Yet they are an endangered species and they are a key part of the African ecosystem, cleaning up the carcasses left behind by lions and other large predators. They are champion recyclers of biomass and reduce the risk of infectious diseases such as anthrax.

The idea does seem to work. Swaziland introduced vulture restaurants to supplement food availability when other sources of food were in short supply. Numbers have grown to the point hat they may soon start moving them back into regions that have lost their vultures, the authors say.