UCD scientists went to Iceland to study subglacial activity in the wake of the ash cloud. With them went a painter 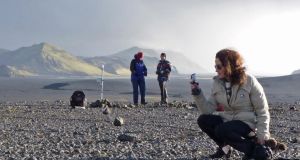 Siobhán McDonald, artist-in-residence at the science building in UCD, at work at Vatnajökull in Iceland, with a team of scientists

Earlier this month, an Irish team of scientists from University College Dublin set off on an expedition to the Vatnajökull glacier in Iceland. They were leaving a rare warm Irish summer to spend a couple of weeks in a remote, cold, windswept region about a 2½-hour drive from Reyjavik.

Their mission? To place an array of seismometers along the flanks of Grimsvotn, an active volcano that sits at the edge of the glacier, and record the tremors and rumbles that occur deep below the glacial ice. The idea is that by listening closely to the “heartbeat” of Grimsvotn, the team might learn more about the inner workings of the volcano, and perhaps gain some useful information to help detect the early signs of an eruption.

The trip is part of Futurevolc, an international project funded by the European Commission to try to improve the monitoring and evaluation of volcanic hazards. Iceland is a rich source of such hazards, as the rest of Europe discovered in 2010 when the Eyjafjallajokull volcano spewed out a giant ash cloud that brought massive disruption to air travel. The volcano being explored by the UCD team erupted a year after Eyjafjallajokull, but its ash cloud headed off east, sparing Europe, and thus making fewer headlines.

“We want to be able to distinguish between is the volcano becoming active or is it just water activity or is the glacier moving,” says Dr Aoife Braiden, from the school of geological sciences at UCD. “When Grimsvotn last erupted, the lava took 2½ hours to melt through the ice before it became visible. Having all the information early on can make a big difference when you’re evacuating a region affected by volcanic activity.”

To get on this team, you need to be well-versed in volcanology, a specialist in seismology or have a grounding in geology. Or you could simply have a talent for creating beautiful art from the apparent desolation of this region of Iceland. For this trip, the team brought along the artist Siobhán McDonald, who is artist-in-residence at the science building in UCD.

Her mission? To listen to the volcano, gather information and harvest inspiration for an exhibition and sound piece. And maybe uncover some hitherto unseen connections between Iceland’s volcanic activity and Ireland’s weather patterns down through the centuries.


A shade of Eyjafjallajokull
McDonald’s love affair with Iceland began when she was cycling through Dublin in 2010 with a new painting she had just finished, and which hadn’t completely dried yet. By the time she arrived at her destination, her painting was covered in a layer of soft ash, the fallout from Eyjafjallajokull.

When everyone else was trying to get away from the ash cloud, she wanted to get closer to this forbidding but fascinating landscape.

“I wanted to experience all that whiteness and put it in my paintings,” she says. “Iceland is constantly erasing and recreating itself – it’s like a blank canvas. It’s inspiring for me as a painter.”

Over the past couple of years, McDonald has made a few trips to Iceland and put her impressions down on canvas. The landscape may look barren, but for McDonald it is alive with possibilities. And there is life aplenty if you look and listen closely enough.

It’s utterly quiet and peaceful on an Icelandic glacier. It’s also very cold, with a biting wind, in stark contrast to the unusually warm summer we have had.

“All the senses are muffled,” says McDonald. “You’re in a completely different headspace. There are no sounds up here except the sounds generated by the wind or the odd bird or fly going by. You’re aware of the raw energy of the place and how the natural forces gather there.”

Now that this expedition has ended, the next task is to go through the data, analyse it and try to make sense of it. The seismometers left by the UCD team will continue to generate information, which will be recorded and pored over by Braiden and the rest of the team.

Meanwhile, McDonald will be using the sounds, sights, soil samples and light impressions she has gathered to generate a new series of paintings.

An exhibition is planned for the Fenderesky Gallery in Belfast later this year. She will also be collaborating with the composer Susan Stenger, who has worked with John Cage, to create a special sound piece based on the deepcore data from the Icelandic glacier.


Populations at risk
The data gathered by the UCD team will have applications wherever volcanic activity poses a threat to the local community, such as in Italy, where Vesuvius and Etna are still considered a threat to the large populations living in their shadow.

“You can’t prevent an eruption, but if we know more about what’s going on inside a volcano, we might be able to minimise risk and vulnerability,” says Dr Braiden.

If, by chance, the UCD team doesn’t manage to develop an early-warning system for volcanic eruptions, McDonald may be able to help. During her research, she met local people living in these remote parts of Iceland, and found they had a knack for knowing when volcanic activity was stepping up in the area. And one of the most reliable early-warning systems, says McDonald, are common-or-garden ravens.

“I’ve been gathering stories from people who live around the Vatnajökull region, and they told me how the ravens communicate with folk by tapping on the windows, like a Morse code, to warn of an imminent eruption. Many of these folk are third-generation volcano dwellers, with a highly tuned-in ability to feel the planetary waves.”


Scientific palette: Art, Dev and the Jesuits
Siobhán McDonald takes a scientific approach to creating her art, which chimes with her status as artist-in-residence in UCD’s science building. For her previous project ,The Eye of the Storm, McDonald visited Tom Blake, director of the Irish National Seismic Network in the Dublin Institute for Advanced Studies’ school of cosmic physics, to discuss the Earth’s geology and structure.

“He brought me down to the basement – where Dev once hid – and showed me a collection of seismograms made by the Jesuits in the early 20th century. It was an incredible find – these scrolls had been sitting there for years, and they didn’t know what to do with them.”

To make the seismograms, the Jesuit scientists used a paper-blackening technique that is now all but forgotten. McDonald travelled to Göttingen, Germany, to visit one of the few seismic stations left in the world that still uses the process, and studied the technique, which she now uses as part of her work.

McDonald has been commissioned to create a work to be permanently displayed at the entrance to the new Science Centre at UCD.

Futurevolc is coordinated by the University of Iceland and the Iceland Met Office.

Prof Chris Bean is the UCD lead. Siobhan McDonald is collaborating with Prof Chris Bean this year in the making of a sound piece together with the Internationally acclaimed composer Susan Stenger.