Scientists say discovery would be ‘truly revolutionary for astronomy’ 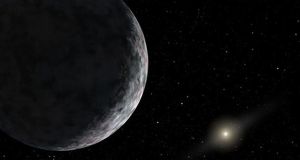 Undated handout artist impression of one of the two as-yet undiscovered planets as big as Earth or larger may be hiding in the outer fringes of the Solar System, scientists believe. Photograph: PA

Schoolchildren may need a new mnemonic to remember the sequence of planets as astronomers now believe there may be at least two ‘new’ planets in our solar system.

The two planets – which may both be bigger than earth – could be orbiting in the furthest reaches of the solar system out past Pluto, which was demoted from the status of planet to a dwarf planet in 2006.

The discovery of possible new additions to our existing eight planets, if confirmed, has been described by one of the scientists involved as “truly revolutionary for astronomy”.

The research is being carried out by from scientists at the University of Madrid and the University of Cambridge. They have been tracking large asteroids known as “extreme trans-Neptunion objects” (Etnos) which orbit the sun at least six billion kilometres away.

The scientists have found the objects orbit the Sun in a manner consistent with them being subject to the gravitational pull of a planet at least as large as Earth.

Neptune was discovered in a similar fashion when astronomers accurately calculated its existence from irregularities in the orbit of its neighbouring planet Uranus.

Spanish lead scientist Professor Carlos de la Fuente Marcos, from the Complutense University of Madrid (UCM), explained: “This excess of objects with unexpected orbital parameters makes us believe that some invisible forces are altering the distribution of the orbital elements of the Etnos, and we consider that the most probable explanation is that other unknown planets exist beyond.”

Professor Marcos concluded that there are at least two planets “and probably more within the confines of our solar system”.

Though more data was needed, the possibilities were “truly revolutionary”, he added.

The new research, published in the journal Monthly Notices of the Royal Astronomical Society Letters, is based on analysis of an effect called the “Kozai mechanism”, by which a large body disturbs the orbit of a smaller and more distant object.

The scientists wrote: “In this scenario, a population of stable asteroids may be shepherded by a distant, undiscovered planet larger than the Earth”.

The “super Earths” as they have been described are orbiting at 250AU (astronomical units) from the sun, a distance of almost 40 billion kilometres. At such distances, the planets would reflect so little light from the sun that they would be invisible even to the most sensitive telescope.