The research into Ireland’s greatest challenges

Jane Ohlmeyer, as chairwoman of the Irish Research Council, will oversee its vital new role in support of scientific research 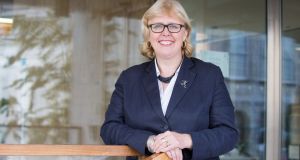 Prof Jane Ohlmeyer, chairwoman of the Irish Research Council: “What we have in Ireland is as good as you are going to get”

This is going to be an important year for the Irish Research Council. Today it launches a new public outreach initiative telling people about the research being done here. And during the year it will establish a new research funding programme that will support curiosity-driven science in which real-world applications are not immediately apparent.

There is nothing inconsistent in the fact that these largely science-related ventures will be overseen by a historian. Trinity College Dublin academic Prof Jane Ohlmeyer became the third chairperson of the council last September. She was more than happy to take on the role.

“For me it is a team effort, and part of what I want to do is build on the foundations that are already there,” says Ohlmeyer, the Erasmus Smith Professor of Modern History at Trinity and director of the Trinity Long Room Hub. “I am a frontline researcher who steps in as chair for a few years. We want to take the council to the next stage with a programme based on excellence.”

She takes over as chairwoman just as the council is taking on an important new role in support of scientific research. The Government’s Innovation 2020 research strategy, which was launched last December, designated the council as the body responsible for delivering a forward- thinking research funding programme.

The first call for proposals under this programme is a key priority for the council and is planned for the fourth quarter of 2016 via its Work Programme.

Although the inclusion of this basic research-funding programme has been very well received by the research community, it looks very much like what the council does already, Ohlmeyer says. The council has targeted funding for early- career researchers in scientific, engineering and humanities disciplines since its formation in 2011, after the science and humanities councils merged.

It has an annual budget of €35 million for this work. “We are really helping to build the research ecosystem with funding for postgraduates and research fellows,” she says. “It was always intended for curiosity-driven, frontier-type research activity, and funding has always been granted on the basis of excellence and international peer review. That doesn’t mean you don’t want the research to have an impact, but that is how it has always been. The remit has not changed much since the beginning. We have been given the remit for frontiers research but this is one space where the Irish Research Council has really excelled.”

“We are talent-spotting at an early stage. We are creating an internationally competitive core of researchers in a wide variety of areas in the sciences and in the humanities.”

The council has served the Irish taxpayer very well, says Ohlmeyer. She has worked with research councils in other countries. “What we have in Ireland is as good as you are going to get.”

Ireland, in common with other western countries, is facing challenges unlike any it has faced in the past, not least climate change. Some have an economic basis whereas others have a social basis.

“We are helping address some of the great challenges facing Ireland today,” she says.

It will be clear to Ohlmeyer if the council succeeds in its efforts to grow our research base. “We know we will be doing a good job if we are producing high-quality products and people, and if the research makes an impact and helps Ireland be a better- informed place about the issues we face.

“All are evidence that the Irish Research Council is working very effectively within the research ecosystem. It is as important in the arts and humanities as in the pure sciences, biology, information technology and engineering.”

Ireland has researchers who are studying the sun, plumbing the ocean depths for new marine life and learning how Irish people lived 1,000 years ago. There are others developing new probiotics, studying the best way to build a city and using the immune system to kill cancer (right).

The Irish Research Council wants the public to know about the discoveries being made by researchers working here in 70 different academic disciplines.

The initiative Love Irish Research will help the public to understand the work of researchers and to realise the potential for careers working in research. The programme will help people to connect with those conducting research, to discover what motivates these researchers and to hear about their discoveries.

It will highlight the wealth of Ireland’s research talent and demonstrate the diversity of research here.

Today the council publishes Discovery Ireland: New Ideas, New Frontiers, a booklet about researchers in Ireland and the work they are doing.

“We want to emphasise the variety and the depth of research under way as we try to build a knowledge economy and do it in a way that a nonspecialist would understand,” says Ohlmeyer.

Love Irish Research’s programme will include competitions and awards, regional and institutional showcase events and publications.