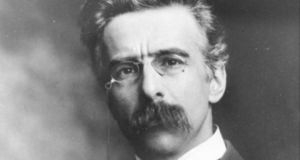 In this season of anniversaries and centenaries it seems timely to celebrate an important Irish scientific centenary that was a major contribution to world health. The first effective radiation treatment for cancer was developed in Dublin 100 years ago, and was the forerunner of modern radiotherapies.

The idea was the brainchild of John Joly, an inventive scientist from Co Offaly. Joly was a maverick genius whose many inventions include several important scientific instruments – among them the steam calorimeter and the meldometer – as well as a commercial technique for colour photography. But his lasting legacy is arguably his design for an efficient radiotherapy.

The early 1900s must have been a fascinating time in science. The discoveries of the invisible phenomena of radio waves, X-rays and then radioactivity dramatically changed our understanding of the world.

Shortly after Marie and Pierre Curie discovered radioactivity and radium, people started exploring the medical uses of radioactivity. Pierre Curie even held a tiny sample of radium against his skin. People quickly discovered that the energy “emanating” from the new element could cause cancer, yet could also be used to burn and thus hopefully kill a cancerous growth.

This crude technique of using radium itself was the basis for early radiotherapy. Joly’s idea for an alternative treatment was prompted by the fact that the radium approach was hugely expensive, ineffective and dangerous, and often did more harm than good. Radium then cost the equivalent of £165 million per kilogram, or more than €1 billion in today’s money. So people worked with tiny amounts – milligrams of the stuff – which meant it could be used to treat only a few patients.

Another problem was it was hard to control the dose. Moreover, to reach internal cancers the radium was placed in metal tubes that were then inserted into the patient. There had to be a better way.

Back in Dublin, Joly was a prominent figure on the scientific scene, an engineer and physicist who was a professor of geology at Trinity College Dublin and had an interest in medicine. He was also a senior member of the Royal Dublin Society and a governor of Dr Steevens’s Hospital, and that’s where he met cancer expert Dr Walter Stevenson.

Joly’s brilliant insight was to use not the expensive radium itself, but the radioactive radon gas that it gave off. This “emanation” could be collected in thin glass tubes; the amount or dose of radiation could be controlled; and the gas could be injected to the core of the tumour, where it could percolate through the tumour and have the best chance of killing the cancerous cells.

More patients could be treated than before, and the new technique was better, more effective and significantly cheaper than existing methods. Joly’s “Dublin Method”, as it was called, was soon widely adopted; Marie Curie is known to have used it in France to prepare radiation treatments during the first World War.

If Joly had the idea, it was Dr Stevenson who undertook the initial trials with his patients, while all the practical challenges of collecting, purifying and measuring the “emanation” was done by the RDS’s chemical analyst, RJ Ross.

In May 1914 Joly published his idea in the scientific proceedings of the RDS, and persuaded the society to set up a Radium Institute to develop radiotherapy for cancer patients in Ireland.

The institute’s first task was to raise the £3,000 needed to buy a tiny 200mg sample of radium bromide – the luminous and dangerous salt that the Curies had created when they isolated radium from pitchblende. Two generous donations came from Rupert Guinness, Lord Iveagh, and from a prominent Irish engineer, Sir John Purser Griffith, who donated £1,000 (equivalent to about €120,000 now).

The institute was housed in the RDS’s then headquarters at Leinster House on Kildare Street. It continued to supply Joly’s radon needles for Irish radiotherapy until 1952, when it handed the service over to the new Cancer Association of Ireland, and St Luke’s Hospital was established in Dublin to continue the service, as it does today.

Anyone who has ever received radiotherapy for cancer owes a debt of gratitude to this pioneering and ingenious Irish scientist.

Mary Mulvihill is a science writer. She also runs Ingenious Dublin, a walking tour on the history of science