The bilingual brain is more nimble and efficient

Multilingual people are better at reasoning and multitasking, and work faster and with less effort 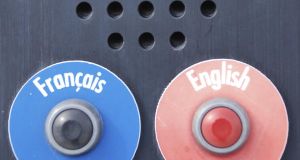 The human brain can be bilingual even before birth. Photograph: Thinkstock

I have occasional bursts of enthusiasm to learn French. But now I have an extra incentive to stick with it because research is increasingly showing that, if you know two or more languages, your brain is better than those who know just one language. Multilingual people are better at reasoning, multitasking, reconciling conflicting ideas. They work faster, with less effort, and retain their cognitive faculties better as they age. The research that underpins this story is summarised by Jeffrey Kluger in Time (July 29th, 2013).

The human brain can be bilingual even before birth. The foetus in the womb can hear the mother’s voice from the beginning of the third trimester (six months), and the speech rhythms of her language(s) pour into the baby’s brain and comfort him/her. The vigour with which a baby sucks on a soother is a measure of how stimulated it is by its environment, and this technique has been used to study babies three days old and younger. When played recordings of multiple languages, babies with monolingual English-speaking mothers suck harder only when they hear English; those with mothers who speak English and French suck harder when they hear either language (Krista Byers-Heinlein and others, Psychological Science , January 29th, 2010).

Babies who are a few months old can recognise language on sight of the speaker alone. From four to six months, babies from both monolingual English homes and bilingual English-French homes can tell the difference between English and French when watching silent videos of adults reading from The Little Prince in English and French, but by eight months only the bilinguals can do this.

Suppressed response
Other research has shown that seven-month-old babies raised in a bilingual home can suppress a previously learned response, whereas babies raised in a monolingual home cannot. Both sets of babies watched a screen and learned that when they heard certain words a puppet always appeared on the same side of the screen – their eyes would turn to that side on hearing the words. In the second part of the experiment the puppet moved to the other side of the screen when cued by the words. Bilingual babies anticipated the new location but not monolingual babies (A Kovacs, Proceedings National Academy of Sciences , 2009).

Indications are that the benefits of early-language training in children will be considerable and may be discernible in brain structure. It is well-known, for example, that motor-control regions in the brain governing finger action are particularly well-developed in violinists and other musicians. But which comes first – are you pre-disposed to be talented because of your brain structure or does training cause changes in the brain?

Kluger describes an experiment carried out at Lund University in 2012 to answer this question. Students at the Armed Forces Interpreter Academy taking a gruelling language course that brings them from no knowledge to fluency in 13 months were compared to students taking equally rigorous courses in medicine or cognitive science. Students’ brains were scanned before and after completion of the course. The language students showed significant growth in the hippocampus area of the brain, which helps govern memory and mastery of new material, and in other areas, where higher order reasoning is processed. There was no change among the other students.

The bilingual brain is more efficient. Constant juggling to choose between two words for every object/concept is great practice at doing several things at once. How deftly one can multitask is approximately measured in the Stroop test. Names of colours are flashed on a screen, with the colours of the letters matching the word, and subjects must say the colour’s name. This is easily done. Next the flashes are mismatched – the colour doesn’t match the word. Subjects must again say the colour – this is not so easy. Bilinguals are faster than monolinguals and make fewer mistakes (Ellen Bialystok, Canadian Journal of Experimental Psychology , 2011).

The advantages of multilingualism are particularly important for older people. Not only are older bilingual brains more nimble than monolingual, but they don’t have to work as hard. Studies of older people suffering from cognitive decline indicate that bilinguals get an extra 4.1 years of clarity before signs of dementia show up – and those who develop Alzheimer’s get an extra 5.1 years. Now where is that Teach Yourself French book?


William Reville is an emeritus professor of biochemistry at UCC. understandingscience.ucc.ie