That’s Maths: When a walking route in central Paris is bridge too far 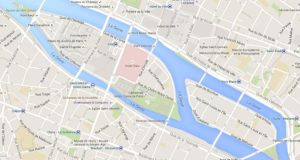 For the Paris problems, both banks of the Seine have seven bridges, an odd number. The two islands each have an even number of links. Thus, the left and right banks must be at the start and end of the route

Leonhard Euler, the outstanding Swiss mathematician, considered a problem known as The Seven Bridges of Königsberg. It involves a walk around the city now known as Kaliningrad, in the Russian exclave between Poland and Lithuania. Since Kaliningrad is out of the way for most of us, let’s have a look closer to home, at the bridges of Paris.

In the centre of Paris, two small islands, Île de la Cité and Île Saint-Louis, are linked to the left and right banks of the Seine and to each other. We consider only bridges that link the two islands to each other or to the river banks, and ignore all other bridges spanning the Seine. The figure shows there are seven bridges from the left bank, seven from the right bank, 10 from Île de la Cité and six from Île Saint-Louis. This makes 30 in all but, as each bridge is double-counted, there are in total 15 bridges.

For the Paris problems, both banks of the Seine have seven bridges, an odd number. The two islands each have an even number of links. Thus, the left and right banks must be at the start and end of the route. It is simple to find a route starting at Saint-Michel and ending at Hôtel de Ville on the right bank. So, the first problem is easily solved.

Since there are an even number of bridges to Île de la Cité, Notre-Dame Cathedral cannot be at the start or end of the route: the second problem has no solution. Finally, since both banks must be termini, there is no closed route and the third problem is also impossible to solve.

Euler’s original problem, The Seven Bridges of Königsberg, had no solutions at all, as each of the four nodes had an odd number of links. His problem, discussed in virtually every textbook on graph theory, is considered as the first real problem in topology. This branch of mathematics is concerned with continuity and connectivity, and studies properties that remain unchanged under continuous deformations, such as stretching or bending but not cutting or gluing. Topology is a powerful unifying theme in modern mathematics.