That’s Maths: How Big was the Bomb? 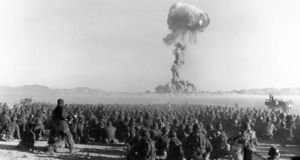 Physicists, engineers and applied mathematicians have an arsenal of problem-solving techniques. Computers crunch out numerical solutions in short order, but it is vital to verify these answers.

The first “reality check” is to confirm that the solution is roughly the right size. The physicist Enrico Fermi was brilliant at “back-of-the-envelop” calculations. He could estimate the size of the answer quickly and painlessly with a few simple calculations.

Another essential check is to ensure that formulas have the correct physical dimensions. The three fundamental dimensions in mechanics are length, mass and time. Other quantities are combinations of these. Area is length squared and volume is length cubed. Density is mass per unit volume, velocity is length per unit time and acceleration, which is the rate of change of velocity, is length over time squared.

Every physical formula must be dimensionally consistent. If a length is expressed as a combination of quantities, the dimension of that combination must be a length. But dimensional analysis is much more fruitful that this.

Let us take a simple example: a brick is dropped from a tall building; how long does it take to reach the ground? The relevant parameters are the mass of the brick, the height of the building and the acceleration of gravity.

To produce a quantity with dimensions of time, we divide the height by the acceleration of gravity and take the square root. This gives an estimate of the fall-time of the brick, correct except for a factor of root 2. The time is independent of the mass, as spotted by Galileo.

Geoffrey Ingram Taylor was one of the great scientists of the 20th century. His grandfather was George Boole, first professor of mathematics in Queen’s College Cork, now UCC. He was a meteorologist in his early career and became a major figure in fluid dynamics, his ideas having wide application in meteorology, oceanography, engineering and hydraulics.

The first atomic blast, the Trinity Test in New Mexico, had an explosive yield of about 20 kilotons, the energy released by detonating 20,000 tons of TNT.

But this value was secret: following the second World War, details of atomic weapons remained classified. In 1947, photographs of the Trinity Test were released by the US army. They aroused great interest and appeared in newspapers and magazines all over the world.

Taylor realised that these photographs would allow him to estimate the energy of the explosion.

The images were at precise time intervals following the initial blast, and the horizontal scale was also indicated. Taylor used the technique of dimensional analysis. He assumed that the radius of the expanding fireball should depend only on the energy, the time since detonation and the density of the air. He combined these quantities to get an expression with the dimensions of energy, and found that it was proportional to the fifth power of the blast radius.

Taylor’s value for the energy was 17 kilotons, close to the value later announced by President Truman. Taylor’s result caused quite a stir and he was “mildly admonished” by the US army for publishing his deductions. But it was a mathematical tour de force. Considering the many sources of error, the estimate was, in his own words, “better than the nature of the measurements permits one to expect”.