State in talks to become part of worldwide astronomy group 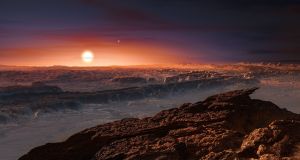 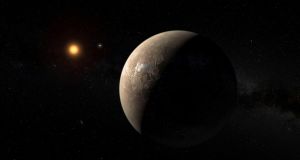 The planet Proxima b orbiting the red dwarf star Proxima Centauri, the closest star to our Solar System, in an artist’s impression released by the European Southern Observatory. Photograph: ESO/M Kornmesser/Reuters 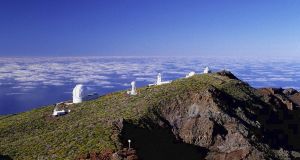 Ireland has opened talks to become part of the European Southern Observatory (ESO), the international organisation that runs the biggest telescopes in the world.

A letter was sent in January to the director general of the ESO Prof Tim de Zeeuw from the Government seeking to open formal negotiations.

Prof de Zeeuw was due to meet the Minister of State for Training and Skills John Halligan on Thursday to discuss Ireland’s application for membership, but that meeting has been cancelled because of the political turmoil surrounding Mr Halligan’s position in Government.

Instead, he will meet with officials from the Department of Jobs, Enterprise and Investment. Afterwards he will address the Irish National Astronomy Meeting (INAM), the annual gathering of Irish astronomers.

The ESO consists of 15 countries with Brazil poised to join in the near future. It operates an array of telescopes in the southern hemisphere in the Atacama Desert in Chile. The site is chosen because it is one of the driest and most isolated places in the world and the skies are always clear.

The ESO operates the Very Large Telescope (VLT) which recently discovered the presence of an exoplanet Proxima b around Proxima Centauri the nearest star. Proxima b is in the so-called “Goldilocks zone” which means that water can exist there in liquid form meaning that conditions there are suitable for life.

The ESO is currently building the Extremely Large Telescope (ELT) nearby in Chile. It will have a mirror 39m in diameter, 25 times the light-gathering potential of the VLT.

Prof de Zeeuw said the ELT would have the potential to detect chemical signatures around exoplanets. He said it ought to be possible with the new telescope to confirm the presence of life elsewhere in the universe if it exists.

He likened the ELT to the difference between naked eye astronomy and Galileo’s invention of the telescope.

“If we are not alone in the universe, it will be the biggest scientific discovery of all time,” he said.

“Somebody in Ireland might make that discovery. Astronomy is a field that speaks to the imagination. It attracts people to the sciences and there is large public interest. It is a good thing to invest in.”

Membership of the ESO costs €14 million as an entrance fee and then about €2 million a year depending on the size of Ireland’s economy.

Prof de Zeeuw said the money gives Ireland access to the best ground-based telescopes in the world, access to teams in Europe which build high-tech instruments and Irish technology companies would be able to bid on contracts for these telescopes.

“These instruments are not built by graduate students in basements,” he said. “The new telescope project costs more than €1 billion. That is serious big industry.”

He said Ireland had a small but very focused astronomy community especially in the area of software development.

Ireland’s bid for membership of the ESO has won the endorsement of Nobel Prize winner Prof Brian Schmidt who discovered that the expansion of the universe is accelerating.

“It is my view that ESO offers an outstanding opportunity for Ireland. ESO is uniquely able to provide Irish astronomy world-leading astronomical infrastructure, and in that way, to be world-leading in astronomical discovery,” he said.