Born in New York to Irish parents in 1939 today John O'Keefe is the joint winner of the 2014 Nobel prize for medicine. O'Keefe says the award is a "great honour" for himself, and the field of neuroscience. Video: Reuters 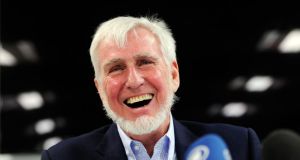 Nobel Prize winner US Professor John O’ Keefe speaks to reporters after winning the award for Physiology or Medicine during a press conference in London. Photograph: Facundo Arrizabalaga/EPA

The award in Physiology or Medicine was given to the three scientists for discovering the brain’s internal positioning system, an “inner GPS” helping humans find their way and giving clues to how strokes and Alzheimer’s affect the brain.

Prof John O’Keefe Nobel Laureate is to be awarded to an honorary doctorate from University College Cork later this year in recognition of his contribution to neuroscience, UCC has just announced.

It will make him an honorary Doctor of Science when he attends to deliver a lecture at the university on December 5th.

The Nobel Assembly, which awarded the prize of 8 million Swedish kroner (€880,000) in an announcement at Sweden’s Karolinska Institute, said the discovery solved a problem that has occupied philosophers and scientists for centuries: “How does the brain create a map of the space surrounding us and how can we navigate our way through a complex environment?”

Ole Kiehn, a Nobel committee member and professor in the Department of Neuroscience at Karolinska Institute, said the three scientists had found “an inner GPS that makes it possible to know where we are and find our way”.

He was born in New York City to Irish immigrant parents. According to University College Cork his father was from Newmarket Co Cork and he still has family living in the area today.

A professor of Cognitive Neuroscience at University College London, Mr O’Keefe discovered the first component of the positioning system in 1971 when he found that a type of nerve cell in a brain region called the hippocampus was always activated when a rat was in a certain place in a room.

Seeing that other nerve cells were activated when the rat was in other positions, O’ Keefe concluded that these “place cells” formed a map of the room.

He then proposed the hippocampus as a cognitive map for spatial memory function and his current work focuses on computational models to predict hippocampal function for which he received the prestigious Kavli Prize in Norway earlier this year.

In 1996, Edvard Moser and May-Britt Moser, who are married and now based in scientific institutes in the Norwegian town of Trondheim, worked with prof O’Keefe to learn how to record the activity of cells in the hippocampus.

Nearly a decade later, the Moser team discovered cells, in the entorhinal cortex region in brains of rats, which function as a navigation system. These so-called "grid cells”, they discovered, are constantly working to create a map of the outside world and are responsible for animals’ knowing where they are, where they have been, and where they are going.

The finding, a fundamental piece of research, explains how the brain works but does not have immediate implications for new medicines, since it does not set out a mechanism of action.

But knowledge about the brain’s positioning system can also help understanding of what causes loss of spatial awareness in stroke patients or those with devastating brain diseases like dementia, of which Alzheimer’s is the most common form and which affects 44 million people worldwide.