The clouds over the Phoenix Park, Dublin prevented hundreds of people from witnessing the Solar eclipse. The event is quite rare in Ireland, with the next one not due until 2026.

With the Faroe Islands the location for the total solar eclipse, this timelapse video captures what was visible from the capital Tórshavn. Video: Reuters. Music: Lee Rosevere. 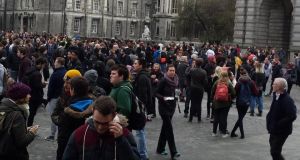 Hundreds are gathered at Trinity College Dublin to see the solar eclipse. Not quite the show they were hoping for as clouds block the view. Photograph: Dick Ahlstrom 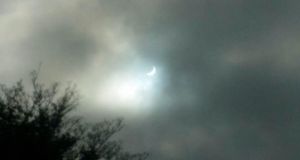 View of the solar eclipse from Athlone. Photograph: Neil Coles 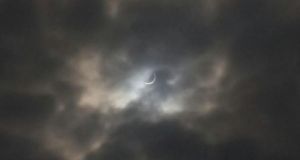 View of the eclipse from Thurles. Photograph: Deirdre Cullen

The near-total solar eclipse has finished in the skies above Ireland. Unfortunately, a cloudy, overcast morning prevented many people from viewing the spectacle fully.

One group of stargazers gathered at the front square at Trinith College Dublin. The eclipse watch at Trinity had all the hallmarks of a good rock concert. The event attracted at least 1,000 people and there was a great atmosphere as people waited for an opening in the clouds.

A big roar went up any time the sun broke through, even though these appearances only lasted for a few seconds. It was enough though for a chance to see a big bite taken out of the sun by the passing moon.

All told the crowd saw no more than 8 or 10 seconds of the sun, but this didn’t dampen spirits at all.

“I am extremely happy with the public support for the eclipse watch,” said Dr Shaun Bloomfield of Trinity’s school of physics, one of the organisers.

“It was great to see so many turn up when they knew it was cloudy, but they still came out.”

One break in the clouds came when the eclipse was near its deepest. Soon afterwards though people started to stream away, just like the people who leave the concert early and miss the encores.

By the time the eclipse was half an hour from completion most people had left leaving behind the diehards who were rewarded with a few more views before the drama ended.

Beginning at 8.30am, the temperature gradually dipped and the skies dimmed as up to 95 per cent of the sun was blocked by the moon. The darkness peaked at about 9.30am and daylight levels returned to normal after 10.30am.

Ireland did not see full darkness, as the exact centre of the shadow caused by the moon moving across our view of the sun was further to the west and over the Atlantic.

In Galway, hundreds of people lined Salthill’s promenade in Galway from 8.30 am to witness the almost total solar eclipse in relatively clear skies with some large but accommodating clouds.

Many had made viewers but some were ignoring advice from opticians not to look directly at the sun as the passing moon cast its shadow.

Dozens of pupils and staff at Galway Business School also took to the roof with a view over the bay for the spectacle.

In NUI Galway’s quadrangle, staff from the Centre of Astronomy provided 100 solar shades snd a solar telescope for students, staff and members of the public.