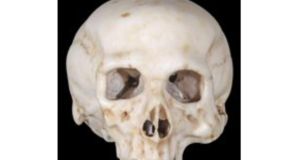 A model skull picked up in an antique shop in 1987 turns out to have been crafted by the great Renaissance artist and anatomist Leonardo da Vinci. Chemical tests on the materials used are consistent with Leonardo’s involvement and there is a close match between errors in the skull and drawings done by the artist in 1508.

A German couple bought the artefact, a one third model of a human skull. It showed exceptional workmanship and minute anatomical detail, but it took nearly a decade before the possibility emerged that Leonardo was the artist who made it.

Skull expert Roger Saban in Paris linked it to an anatomic drawing RL 19057, an unpublished work known to have been done by the artist held in the Royal Collection in Windsor Castle. Belgian researcher Stefaan Missinne handled the skull and published a scientific paper on its origins in the Springer journal Wiener Medizinische Wochenschrift.

Despite their exceptional detail, the drawing and the skull share the same small anatomical errors, producing a strong link with Leonardo. This is further strengthened by a chemical analysis done by graduate student Elizabeth Ahner in 2007.

The skull is made from an agate-based mix of quartz and gypsum, called “mistioni” by Leonardo and invented by him between 1503 and 1509, writes Missinne. Measurements of iridium in the material showed it was likely sourced in a mine near Volterra, Italy. No other artist was known to have made use of this material.

“The skull was exhibited several times, the last being in Leoben, Austria, and not one negative reaction was expressed on its attribution to Leonardo,” says Missinne.