Scientists may have just learned how to read your mind 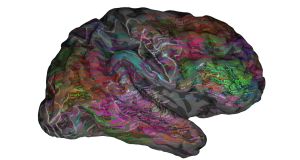 An image showing a view of one person’s right brain hemisphere. The overlaid words, when heard in context, are predicted to evoke strong responses near the corresponding location in the brain. The colour of each word indicates its semantic category. For example, green words are mostly visual and tactile concepts, while red words are mostly social concepts. White lines show the outlines of known functional brain regions. Visualisations created by Alexander Huth using pycortex software by James Gao, Mark Lescroart, and Alexander Huth.

Scientists in the US have raised the possibility of reading a person’s mind after mapping where the brain responds to individual words.

A team at the University of California Berkeley have built a “semantic atlas” that shows how the human brain organises language.

Brain experts have already defined areas that process information about the meanings of words, known as the semantic system.

This work goes far beyond that however, showing in remarkable detail exactly where in the brain the meaning of individual words is processed.

Prof Jack Gallant and colleagues from Berkeley had seven people listen to hours of stories from a radio programme.

During this time, the scientists used functional MRI scanners to “watch” what was happening in their brains and what areas responded to particular words.

This allowed them to make the connections between a given word and its meaning and where in the brain this connection took place.

They published their findings on Wednesday in the journal Nature.

Words often have more than one meaning and the map shows this in beautiful detail. The word “top” triggers several parts of the brain, one associated with clothing, another with shapes and measurements and a third with buildings.

In the same way they found that associated words can group together into a single region depending on meaning.

One area dealt with the meaning of words such as wife, mother, pregnant and family, the researchers said. An adjacent area also responded to wife and family but also house and owner.

Each person has a unique semantic map but the researchers were surprised at the similarity between subjects in terms of the areas of the brain involved.

The research was not about developing a mind-reading device, yet being able to localise where a word is interpreted may open the way to such a development.

It could help patients who have difficulty communicating express what they want to say without speaking, the researchers said.

The research also serves efforts to understand how the brain organises language.

The team produced a video that helps explain how the brain responds to words.