Being obese disturbs the ‘Swiss Army knife’ of the immune system 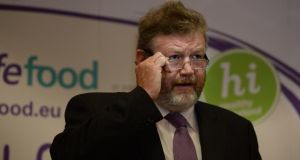 Scientists have found a link in children as young as six years of age between childhood obesity and the later development of type 2 diabetes, cancer and heart disease.

Being obese disturbs what the researchers describe as the “Swiss army knife” of the immune system leaving it less able to do its job in protecting against disease.

“It is scary stuff. The findings are stark and scary,” said Prof Donal O’Shea, who took part in the research. The 49 obese children involved in the study ranged from 16 down to as young as six and all showed signs that obesity was weakening their immune systems.

“The foundation for early adult disease is clearly being laid from the beginning,” said Prof O’Shea, an endocrinologist working at St Vincent’s hospital and at the National Children’s Research Centre at Crumlin hospital.

Research team
The research team had been studying immune system suppression in obese adults with these diseases and wanted to see whether the biochemical changes were also evident in children, he said.

They assumed they would need to study hundreds of children to see the changes, but the evidence was found immediately and the differences between obese and non-obese children were obvious. “The bottom line is we are seeing obesity having a major impact on children’s immune systems down to the age of six,” he said. The work focused on one of the most important immune cells in the innate immune system – the invariant natural killer T cell. Prof O’Shea described it as the “Swiss army knife of the immune system” given it is involved in a number of important processes such as inflammation.The reduction in these T cells in adults was also clearly evident in the obese children. “The small sample size was the shocking part of this discovery,” he said. He described the findings as “the most important piece of research I have been involved in”.

The research was published online in the Journal of Clinical Endocrinology and Metabolism and was funded by the Children’s Medical Research Foundation.

Type 2 diabetes used to be a disease seen in those in their 50s and 60s but it is now being seen in late teens and 20s, Prof O’Shea said. “If you are a policymaker looking at the future health budget you can’t look at this and stick your head in the sand,” he said. “Adult disease becomes inevitable if there is no intervention.”