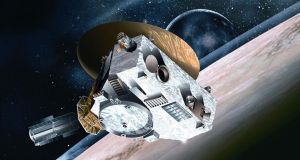 An artist’s impression of New Horizons which is set to get a close up look at Pluto. Photograph: PA

The world will get its closest look yet of dwarf planet Pluto on Wednesday when pictures from the US New Horizons space probe begin to reach Earth.

Snaps from the best holiday ever would not be as anxiously awaited as these images arriving from five billion kilometres away.

The US National Aeronautics and Space Administration will begin releasing these close-ups at about 8pm Irish time.

By then the New Horizons spacecraft will already have left the planet 1.6 million kilometres behind as it continues its journey into a mysterious region of our solar system called the Kuiper Belt..

New Horizons, the fastest spacecraft ever flown, shot past Pluto at nearly 50,000 km/h on Tuesday taking pictures and collecting scientific data. During the flyby, the first close encounter with Pluto ever achieved, the probe passed within 12,500km of the mysterious world.

The public and media are fixated on seeing pictures of Pluto, images which will tell us a great about the surface and what might lie below the ice and crust.

But the New Horizons mission is about much more than pictures. Aside from its powerful telescope the probe carries six separate experiments that captured a wealth of information during the flyby of Pluto.

One takes ultraviolet images and another produces true colour images of the surface. There are particle and dust detectors and an instrument that measures the solar wind and a radio experiment which will tell scientists about the planetoid’s atmosphere.

Then there is the ongoing mission to fly deeper into the Kuiper Belt, the region beyond planet Neptune where Pluto and its moons lie.

This large debris field is full of bodies, leftovers from when the solar system formed. The mission plan is for New Horizon to visit at least one of these objects as it continues to fly out into deep space.

Planners have identified three possibles, but are unsure whether they will be smaller versions of Pluto or made of something else. The target Kuiper Belt bodies range in size from 20 to 55km across, much smaller than Pluto’s 2,328km diameter.

So New Horizons is doing much more than taking snaps, it is capturing a wealth of data of all sorts that will take scientists years to analyse to help understand the strange planet that is Pluto.

New Horizons launched in 2006 and has travelled for nine years to gather images and data on Pluto. In 2007 the vessel got a gravity “shot” from Jupiter to propel it towards Pluto.

Pluto was discovered in 1930 but was renamed a dwarf planet in 2006, considered too small to be a full planet. Its distance from the sun makes it colder and darker than Earth, but at two brief moments each day the sunlight on Pluto is the same as light on Earth, said Nasa.