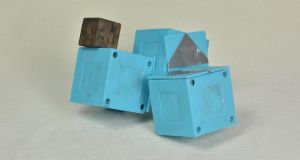 A moving robot child produced by the mother robot after the mother had tried different block combinations. Photograph: University of Cambridge 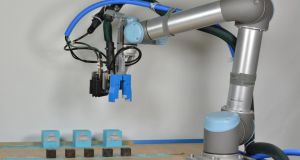 The robot “mom” pauses to consider the design of her next robot child. Photograph: University of Cambridge

A robot “mom” has shown evolution works as well with robots as it does with animals.

She delivered generations of “child” robots, testing their capabilities and improving her designs without any human intervention other than the initial command to go forth and multiply.

The genetic “fitness” of each design was tested on the basis of how far the “kids” could travel across a table in a given amount of time.

Better designs that gave preferential traits were passed on to the next generation, but “mom” mercilessly discarded offspring designs that didn’t make the grade.

‘I blame the parents’

This meant, however, she was open to that old “I blame the parents” rebuke if one of her offspring didn’t turn out quite so well.

“That’s essentially what this robot is doing - we can actually watch the improvement and diversification of the species.”

The designs were pretty basic, made up of from one plastic cube to five of the cubes, with a small motor inside. These could be connected together in a variety of ways, with the aim being to deliver an offspring that could travel as far as possible.

A number of design options began to evolve, with improved traits carried forward into the next generation. “Mutations”, oddball combinations, were also sometimes thrown in by the robot mom.

Evolution and natural selection did the rest and it worked, as it has for us DNA-based species. The kids delivered in the final generation were twice as fast on average than the fastest robot kids in the first generation.

The researchers, writing in the journal PLOS One, stressed that no computer simulation was used to control the robot mom’s designs.

This meant, however, that she could not make use of pre-identified designs, she had to come up with these on her own. It meant that the process of “birth” was a bit slow.

Each child took her about 10 minutes to design, build and test.