Pythagoras would have approved of Dublin’s huge harp

That’s Maths: A performance at Dublin Fringe Festival will turn the Samuel Beckett Bridge into the biggest musical instrument in Ireland 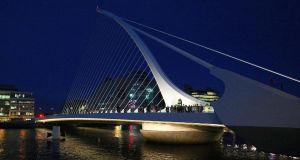 The life of Pythagoras is shrouded in myth and legend. He was born on the island of Samos and travelled to Egypt, Mesopotamia and possibly India before arriving in Croton in Magna Graecia, now in southern Italy. There he founded a secret society with a strict code of morals and behaviour.

The Pythagoreans studied mathematics as a philosophical pursuit and not for any immediate practical ends. Indeed, the words “philosophy” and “mathematics” are said to have been coined by Pythagoras himself. He was a contemporary of Buddha, Confucius and Lao-Tze. In addition to his philosophical and mathematical activities, Pythagoras was a mystic and prophet, having absorbed religious as well as scientific knowledge during his wandering years.

The profound idea of the Pythagoreans was that nature could be understood through mathematics. Their motto was, “All is number”. Arithmetic became a branch of philosophy and number a basis for explaining the physical world.

Pythagoras’s interest in harmony was aroused by the sounds of hammers ringing on an anvil. Some sound combinations were pleasant and some dissonant. He experimented with stretched strings and found that strings whose lengths are ratios of small numbers produce harmonious sounds. If a string sounds middle C, a string half the length will be an octave higher. A length ratio of 3:2 gives a musical fifth. The entire octave can be built up from simple ratios using the “Circle of Fifths”. Pythagoras extended these ideas to the celestial domain and the “Harmony of the Spheres”.

On a guitar, all six strings have equal length, so different pitches are achieved by varying the tension. For instruments such as the harp and piano, string lengths and densities vary, and a wide range of notes is available.

The Samuel Beckett Bridge, which spans the Liffey, was designed by Santiago Calatrava and opened in 2009. It is 120m in length and 48m high, and it swings open to allow ships to pass up and down the river. The bridge has 31 cable stays to support it. They resemble the strings of a great harp, a symbol of Ireland. One can imagine the cables being plucked by some giant to produce a melody.

In fact, this is what will happen next Saturday at an event to mark the opening of the Tiger Dublin Fringe Festival. Structures such as the bridge have natural frequencies of oscillation or “normal modes”. When struck at different points, various tones are produced. Bristol-born composer Tom Lane has written a musical piece using the tones produced when the heavy stays are hammered into oscillation.

According to Lane, the sounds of the bridge are strange, more like metal gongs than a harp. The composition, Harp: A River Cantata, tells the tale of the Harp of Dagda, a magical instrument that was played to keep the seasons in order and to regulate the weather. He was high king of the Tuatha Dé Danann and battled with the Fomorians at Moytura. The performance will turn the bridge into the biggest musical instrument in Ireland.