Putting the marine life back into ocean sprawl 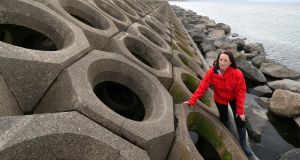 When Joni Mitchell’s ode to overdevelopment, Big Yellow Taxi, made for a hit single in the 1970s, the wide blue yonder was still regarded as a safe retreat from urban blight.

Now, however, “ocean sprawl” has become the contemporary version of the singer-songwriter’s “paved paradise”, with marinas, jetties and piers being the “parking lots” on water. And while Australia’s Sydney Harbour may dazzle on television screens during its annual New Year’s Eve fireworks displays, it ranks along with coastal cities such as Geoje in South Korea as a leading example of an expanding marine rim.

Three years ago, marine biologist Dr Louise Firth was one of a number of scientists who began looking at new ways of making the most of such necessary evils and responding to the potential loss of habitats. As reported in this newspaper at the time, Firth and colleagues involved with an EU-funded Theseus initiative began researching ways to make artificial coastlines more conducive to marine flora and fauna.

Firth, then based at NUI Galway’s Ryan Institute, didn’t have to look too far for an ideal platform for research. She selected the causeway built to link the once-controversial sewage treatment plant on Galway Bay’s Mutton Island.

The 0.8 km-long causeway was built with pre-cast concrete hollow-core Shepherd Hill energy dissipation (Shed) units. It offered a unique opportunity to test different conditions under varying tide heights simultaneously. Firth secured approval to create 80 artificial rock pools, by pouring quick-drying concrete in buckets around the base of the units.

The west side of the causeway is exposed to swells coming in from the Atlantic Ocean, while the eastern side is relatively sheltered. Biodiversity patterns tend to differ with varying levels of wave exposure, Firth says, so sheltered pools “typically support lower biodiversity than moderately exposed equivalents”.

The causeway’s design allowed for testing under two different types of wave exposure: sheltered, within inner Galway Bay; and exposed to the Atlantic Ocean. Firth anticipated that red algae would be among the first colonisers, along with crabs, shrimp, shellfish and perhaps even small fish.

In May 2014, a year after creating the rock pools, she undertook the first visual sampling; and in May 2015 she removed colonising organisms to examine and identify them, a procedure known as “destructive sampling”, whereby everything is scraped out and analysed. By this time, her “eco-engineered” nursery had survived several winter storms.

The 12-month sampling, in 2014, revealed that the lower rock pools on the exposed side were already rich in organisms. After 24 months, the sheltered pools were inundated with sediments and were deemed to have “failed” as potential habitats.

By contrast, she counted more than 70 population groups in the exposed pools, ranging from different types of marine algae to molluscs, hydroids, little shrimps and prawns. She was genuinely surprised to find that the higher pools were so incredibly rich in samples.

“We had expected these higher pools to be barren, and so we have no idea why they proved so fruitful,”she says. “We also found some species in the upper pools which weren’t in the lower ones – I have never seen kelp growing that high up, for instance.”

Firth, who is now at Plymouth University in England, believes the research proves there is a place for eco-engineering, which can help to protect and nurture species under threat. Previous research on ocean sprawl has recorded how structures can serve as a magnet for invasive species which may be transported on the hulls of ocean-going ships. However, the Mutton Island pools attracted no invasive species, she says. “The only two invasive species we found – Pacific oysters and a type of barnacle – were on the causeway itself.”

The fact that her 80 artificial pools were completely unaffected by the unprecedented series of storms during the winter of 2013-14 is another measure of success. Such resilience was an unexpected bonus in Ireland’s first marine eco-engineering experiment of this type, she says.

LIVING ON THE EDGE: A ‘RESILIENT’ APPROACH

Renewed interest at European level on “harnessing ocean wealth” (as Ireland’s 2012 report on marine strategy put it) could lead to further “marine sprawl” across the Continent, with land reclamation accompanied by pipelines, fish-farm cages and offshore turbines.

When sensitively handled, as in countries such as Norway, these developments can bring wealth to coastal communities, but it is a delicate balance that too often puts the local economy before society’s wider interest.

At local level, coastlines have been progressively “hardened” over the past century and more. Rock armouring, breakwaters and other “hard engineering” structures to protect against erosion have become an accepted feature of populated coastal environments. As weather patterns change and sea levels rise, such structures are likely to multiply, in spite of a long-running debate about their negative impact on natural shorelines and habitats.

“We are building lots of artificial structures that are typically featureless, but they don’t have to be that way,” says Dr Louise Firth, of Plymouth University.

Although eco-engineering can be expensive, her Mutton Island project was relatively economical. If incorporated into new harbour developments, similar projects could successfully protect fragile habitats, she believes.

This approach is reflected in Britain’s Marine and Coastal Access Act 2009, which states that the benefits of development may include those for “marine ecology, biodiversity and geological conservation interests”, and that these may “outweigh potential adverse effects”.

Plymouth University, where Firth conducts her research, is one of a number of third-level institutions, along with University College Dublin, that are also addressing the issue of green marine engineering on a global scale.

The World Harbour Project (worldharbourproject.org), initiated by the Sydney Institute of Marine Science, aims to develop “resilient” urban ports and harbours through a network of participating scientists.