Public invited to have their say on the research agenda 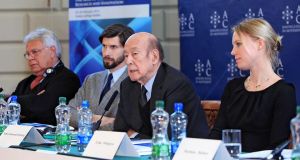 From left, Felipe Gonzalez Marquez and Michelangelo Baracchi Bonvicini of Atomium Culture, with Valery Giscard d’Estaing and Erika Widegren at a European summit on research and innovation in Dublin in Februrary

Should Europe allow the widespread use of genetically engineered food? Why do so few students pursue degrees in science? What can be done about the gender imbalances seen in appointments to senior academic posts in the sciences and engineering?

If these issues are important to you then now is your chance to make your opinions known.

This week sees the launch of Have Your Say About Science, an Atomium Culture initiative that encourages people to make their views about research and investment in science known to the European Commission.

“The results will then be taken into account when plans for research investments during 2014 are being decided,” says Erika Widegren, executive director of  Atomium Culture. “Public submissions will also see areas of particular interest or concern being included in the 2014 programme.”

Each week for the next five weeks a new question will be posed, and the public will be encouraged to respond.

The initial question is about science education and asks why the current rise in the number of students taking science and maths at secondary level is not being matched by the numbers of students participating at third level.

“This will be followed by questions about gender equality in science and engineering, ethics in research, open access to scientific information and why it is important that the public engage with science policy issues. An additional sixth question may be added,” says Widegren.

“This special initiative for citizen engagement will take place over new media, with people encouraged to log on and make their views known,” she adds. “The public often isn’t engaged with these issues. There are few forums where debate can take place, but the initiative opens a new opportunity for people to make their views count.

“It is crucial to ensure that research and innovation are driven not only by the best science and by market potential but also by society’s needs and concerns,” says European Commissioner for Research, Innovation and Science Maire Geoghegan-Quinn.

It builds links between researchers and the media and encourages its media partners, including The Irish Times, to publish EU-funded research discoveries being made across Europe.

The launch this week is a pilot involving five countries including Ireland, Austria, Germany, Spain and Italy. “If the idea is successful we will expand it and do this in all of the EU27,” Widegren adds.

Issues and ideas arising from the pilot project will be submitted to the commission in time for planning for the 2014 research spend, so your views will count.

To participate in Have Your Say About Science, click here