At Cern in Switzerland, home to the Large Hadron Collider, the excitement is palpable – a sense of anticipation that something big is about to happen 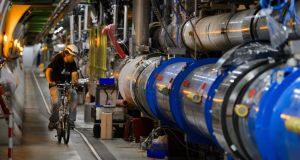 A worker rides by on his bicycle in Cern’s Large Hadron Collider tunnel during maintenance works, near Geneva. Photograph: Fabrice Coffrini/AFP/Getty Image 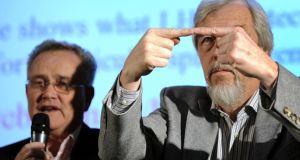 What cost €4 billion, is built in a hole in the ground and needs 4,000 people to run it? Oh, and it might contribute to saving your life.

Not many know the answer – Cern, the European Organisation for Nuclear Research – mainly because what happens there is so complicated. It runs the biggest atom smasher in the world and important discoveries are made there.

But if people heard their children’s science teacher learned how to do her job better there, or that the hospital Pet scanner used to image tissues came out of a Cern research initiative or that new ways to combat cancers are being developed there, maybe they would take a different view.

Clearly there is no shortage of interest in the place: public visitor numbers stand at 100,000 a year. This is only half the number of people who apply but can’t get in because they just can’t fit them all.

Children as young as six participate in activities there and 1,000 science teachers a year go there to learn how to make the study of physics more fun and interesting.

“This is why we say ‘Cern: uniting people’,” says its director, Rolf-Dieter Heuer. “Cern is a role model for when Europe is getting its act together.”

Cern’s effect on people becomes evident as soon as you start talking to those who work there. A feeling of excitement pulses through the place, a sense of anticipation that something big is about to happen. After all, this is where it was confirmed in 2012 that the theoretical Higgs boson is actually real.

This correspondent had the good fortune to visit Cern last week in the company of the European Commissioner for Research, Máire Geoghegan-Quinn. The atom smasher itself is known as the Large Hadron Collider, and is a demonstration of just how much one can buy with €4 billion.

It is science on an awesome scale, a colossal machine that runs through a 27km-long tunnel under the French-Swiss border to form an imperfectly shaped ring. This provides the racetrack around which atomic particles are sent at near the speed of light to crash into one another. Huge energy is released that breaks up the particles, which is the only way that you can see what is going on inside them.

The collisions are tightly controlled and occur at places around the ring where there are huge detectors standing stories tall and weighing thousands of tonnes. These record what is released during the collisions, and send back information about energy levels and the direction of fragments to powerful computers for later analysis.

This is high physics indeed, and those working there find themselves at the frontiers of their science. And there is no doubting their enthusiasm. “The opportunity to work in this place is every physicist’s dream,” says Dr Ronan McNulty, who leads an Irish experimental group working with the LHCb detector.

“You have the capacity to investigate the origins of everything. It is the greatest opportunity ever,” he says.

Another Irish researcher, Dr Karl Johnston, who works on the Isolde experiment at Cern, exhibits a similar enthusiasm. He was doing postdoctoral research at Dublin City University when a job opened up at Cern, and he jumped at it.

“To come to such a huge facility, the possibilities just open up. You talk to people outside your own field and it really opens up your eyes.”

Participation by Irish researchers is limited by the fact that we are not members of Cern. Even an associate membership costing about €1 million a year would be enough to open the doors, and would also allow Irish companies to tender for the thousands of contracts offered by Cern.

Earlier this year, the Minister of State for Research and Innovation, Seán Sherlock, set up a group to review possible membership of a number of European research centres, including Cern. They have already visited Cern and will report later this year. Sherlock is also scheduled to visit the centre in June.

Geoghegan-Quinn, who describes herself as “blown away” by the visit, says “it would be wonderful if Ireland could take part [in Cern], but obviously that is a decision the Government is going to have to make”.

Dr Heuer also expresses his hope that Ireland will join. “I think it is high time that Ireland joins an institution like Cern for the research, for the intellectual opportunity and also, of course, for the private enterprises. I think Ireland, with its tradition and its standing [for research], should really seriously consider it.”

Cern is not only about physics. Some of the technologies developed to support the Large Hadron Collider can also be used in other areas. For this reason, Cern operates a medical applications unit headed by Belfast man Steve Myers.

One of the big projects under way is BioLeir, a biomedical research facility that uses collider technology (the low-energy ion ring or Leir) to improve treatment of cancer.

Standard radiation can kill tumours but also causes significant collateral damage to healthy tissues. BioLeir will use “hadron therapy”, beams of protons or other ions to destroy tumours. These beams can be tuned to deliver the dose only at the tumour site while causing minimal damage to surrounding healthy tissues, says Myers.

“We have set up a number of initiatives,” he says. And because BioLeir is run as an open-access research centre, discoveries and therapies will be moved quickly into improved patient care.

Medical diagnosis and treatments should also benefit from research at the Isolde experiment at Cern. It has been running since 1967 but is undergoing a major refit associated with medical applications, says Irish scientist Karl Johnston, who works with Isolde.

It uses protons from Cern’s accelerators to create novel forms of atoms called isotopes, including ones tailor-made for diagnosis or for radiotherapy in cancer. They are made by bombarding different elements with the proton beams, forcing the formation of isotopes.

Ireland has strong connections with Isolde via Dublin City University. Prof Martin Henry has used Isolde for research since 1997 and Johnston left DCU to take up his role at Cern as Isolde solid state physics co-ordinator.