Positive but wary response to strategy from science community

Scientists deal in facts and evidence: it’s a case of ‘show me the money’ 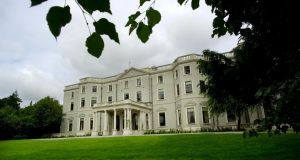 A meeting at Farmleigh, in Dublin, organised by the Department of Jobs, Innovation and Skills, marked a turning point. Photograph : Bryan O’Brien

The early response to the Government’s new science policy has been generally positive, including, somewhat unexpectedly, from members of the science community.

They see it as having the makings of a workable policy where all kinds of research are supported across all disciplines.

Most scientists remain wary, however, given the lack of specifics about the promised increase in spending and whether the strategy supports a balanced investment that includes funding for basic research and for applied research.

Until clarification comes it will be a matter of “show me the money” before things can settle down and researchers can get back to doing what they do best.

This has been a serious point of contention between the academic research community and the Government’s funding agencies.

During the recession years, when money was in seriously short supply, the Department of Jobs, Innovation and Skills, which handled a large slice of the research portfolio, began stressing the need for State spending on science to begin showing a return on investment.

Researchers applying for State funding had to conduct impact assessments and explain why their work was relevant and how it would deliver tangible benefits either to the State or to the public.

The situation built up a great degree of dissatisfaction in the research community. They put this into print in a letter written to Government by three academics and signed by more than 1,000 Irish scientists from Ireland and abroad.

Then, a year ago this month, the Government announced it would open up a dialogue as a prelude to introducing a new science strategy. The research community sent in submissions and these were digested by a cabinet subcommittee.

A meeting at Farmleigh, in Dublin, organised by the department, marked a turning point. It gathered stakeholders – scientists, business interests, Government and State agency officials and more – all in one place, and all were encouraged to make their concerns known.

That meeting seemed to drain away much of the built-up angst, and researchers took on a more hopeful demeanour, having got their points across.

Clearly at least some of their concerns have been dealt with, given the positive tone now coming from most scientists. As scientists, however, they deal in facts and evidence.

It won’t take long for things to break down again if the Government’s promises ring hollow. Equally, the research community will gallop along with the strategy if it supports their desire to pursue knowledge, whether for commercial reasons or for the pleasure of discovery.