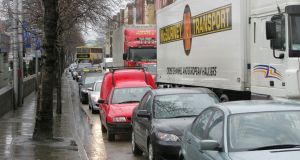 Small particulate pollution coming from diesel engines, particularly trucks and buses can build up in cities and towns to cause health issues for those breathing them in. Photograph: Frank Miller

The health and wellbeing of the people of Ireland are inextricably linked to the quality – or lack off quality – of our environment.

How we maintain the standards of our air and water and how we process and dispose of our waste has a direct impact on how healthy we are as a population.

The Environmental Protection Agency reports that pollution inherent in our environment causes the premature deaths of at least 1,200 people every year.

These deaths represent the hidden costs of failing to maintain a quality environment on the island of Ireland.

These deaths in turn absorb millions of euro in the provision of medical treatments, the costs added to by chronic illnesses caused by dirty water supplies, stress triggered by noise pollution, pollution from transport and electricity generation and other factors.

It is the sixth in a series of reports that present a snapshot of the “state of the environment”, with the first published 20 years ago.

This latest assessment allows people to see how successful we have been in some areas but how poorly we have done in others. . 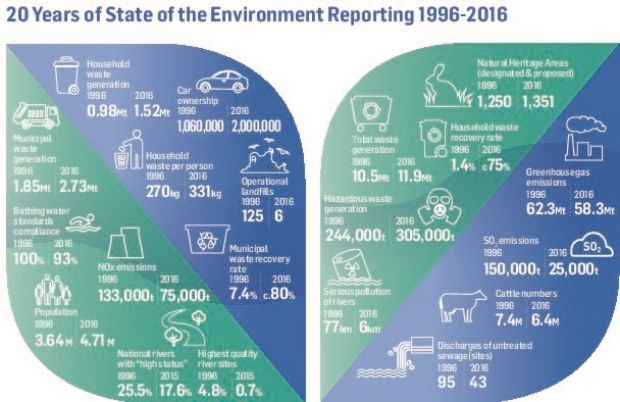 This report is also extremely timely, however, as pointed out by the agency’s director general Laura Burke in her foreword in the document. Ireland, in common with the rest of the world, is at a crossroads due to the impact of climate change, “and the choices we make over the coming decade will have implications for the future of humanity for centuries to come”, she says.

Collectively we must find a way to hasten the end of the “fossil age”, urged on by last week’s news that we have passed the psychologically important milestone of 400 parts per million of carbon dioxide now present in the atmosphere above us.

Carbon levels have not been this high for millions of years, but once in place it could take millenniums for the surplus carbon injected by human activity to be reabsorbed by the environment.

Ms Burke argues, however, that as we make attempts to decarbonise our economy and aim to become carbon-neutral by 2050, there are opportunities in the development of new technologies designed to help us meet our international climate change commitments.

Ireland’s Environment: An Assessment 2016 shows that overall our natural environment can be ranked as “good”, but Ms Burke said she would have to “qualify” what good means.

There are problems with air quality, water pollution, odours and noise across Ireland, but these tend to be localised and are masked by national level assessments, she suggested.

A good example is the small particulate pollution coming from diesel engines, particularly trucks and buses. These can build up in cities and towns to cause health issues for those breathing them in.

These localised problems can affect health and wellbeing and damage quality of life. It is with this in mind that the agency placed a special emphasis in this report on the interconnection between environment and health.

She described it as of “critical importance” to understand and deal with these problems, with better health among the public as the big pay back.

High on the list of continuing problems is our failure to deliver on the water framework directive . Ireland faces EU complaints and infringement proceedings in relation to drinking water quality and urban waste water treatment, Ms Burke says.

This is not about the EU being fussy, “it is about making sure as a minimum, for example, that the water we drink or swim in will not make us sick”, she says.

These are areas where significant investment is necessary, but there are competing financial demands made in health, education and other areas.

Maintaining a quality environment must, therefore, be factored into any decision-making related to capital investment, as it is not external to the debate but central to it. And getting the environment right should bring quality of life improvements along with savings on health system costs.