Picture postcard shots of Earth taken from 1.5bn kms away 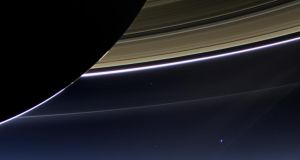 In this rare image taken on July 19, 2013, the wide-angle camera on NASA’s Cassini spacecraft has captured Saturn’s rings and our planet Earth and its moon in the same frame. The earth is the blue dot at the bottom right of the image. Photograph: NASA/JPL-Caltech/Space Science Institute 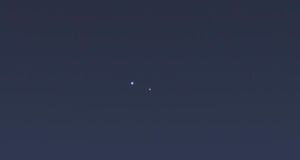 The cameras on NASA’s Cassini spacecraft captured this rare look at Earth and its moon from Saturn orbit on July 19th, 2013. Photograph: NASA/JPL-Caltech/Space Science Institute 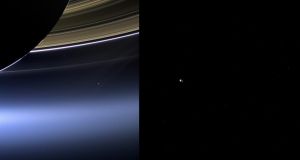 A pale blue dot. This is what we look like from Saturn all of 1.5 billion kms away, along with our moon appearing as a second white dot nearby.

Nasa’s Cassini spacecraft has been in orbit around Saturn’s neighbourhood for some years but this is the first time that its most powerful high-resolution camera captured the earth and the moon as two distinct objects.

The images were taken on July 19th, on the same day that a second portrait, a black and white image was captured by Nasa’s Messenger satellite, 98 million kms away and in orbit around Mercury.

Nasa had encouraged people to go outside when the pictures were taken and wave up at the satellites, claiming that more than 20,000 people around the world participated in the `Wave at Saturn`’ campaign. While none of them, let alone features as large as continents could have been picked out from the images, there is no mistaking the pale blue tint and shows a planet covered by water.

The blue dot “is a succinct summary of who we were on July 19th”, says Cassini project scientist Linda Spilker.

“Cassini’s picture reminds us how tiny our home planet is in the vastness of space.”

Such shots are difficult to get because light from the sun usually gets in the satellite’s “eyes”, disturbing its camera view. Cassini snapped the earth when the sun was behind however allowing the earth and moon to shine through.