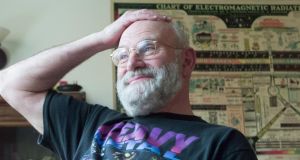 Oliver Sacks, the eminent neurologist and writer, has died at his home in New York City. He was 82.

The cause of death was cancer, Kate Edgar, his long-time personal assistant, told the New York Times, which had published an essay by Sacks in February revealing that an earlier melanoma in his eye had spread to his liver and that he was in the late stages of terminal cancer.

The London-born academic, whose book Awakenings inspired the Oscar-nominated film of the same name, wrote: “A month ago, I felt that I was in good health, even robust health. At 81, I still swim a mile a day. But my luck has run out – a few weeks ago I learned that I have multiple metastases in the liver.”

Sacks was the author of several books about unusual medical conditions, including The Man Who Mistook His Wife For a Hat and The Island of the Colourblind. Awakenings was based on his work with patients treated with a drug that woke them up after years in a catatonic state. The 1990 film version, starring Robert De Niro and Robin Williams, was nominated for three Oscars.

A figure of the arts as much as the sciences, Sacks counted among his friends WH Auden, Thom Gunn and Jonathan Miller. As tributes were paid, Michiko Kakutani, the New York Times writer, praised his ability to make connections.

She wrote: “[He] was a polymath and an ardent humanist, and whether he was writing about his patients, or his love of chemistry or the power of music, he leapfrogged among disciplines, shedding light on the strange and wonderful interconnectedness of life – the connections between science and art, physiology and psychology, the beauty and economy of the natural world and the magic of the human imagination.”

Writing in the Guardian in May, author Lisa Appignanesi spoke of Sacks’s ability to transform his subjects into grand characters.

“For all their lacks and losses, or what the medics call ‘deficits’, Sacks’s subjects have a capacious 19th-century humanity,” she wrote. “No mere objects of hasty clinical notes, or articles in professional journals, his ‘patients’ are transformed by his interest, sympathetic gaze and ability to convey optimism in tragedy into grand characters who can transcend their conditions. They emerge as the very types of our neuroscientific age.”

Sacks was an avid chronicler of his own life. In his memoir, Uncle Tungsten, he wrote about his early boyhood, his medical family, and the chemical passions that fostered his love of science.

He was sent away from London during wartime bombing and endured bullying at boarding school. Feeling “imprisoned and powerless”, he developed a passion for horses, skiing and motorbikes. He got his first motorbike when he was 18. On the Move, the second instalment in his memoir, pictured a youthful, leather-and-jean-clad Sacks astride a large motorbike, not unlike Marlon Brando in The Wild Ones.

Growing up, he witnessed the torment of his schizophrenic brother and his treatment with drugs. Appignanesi said the seeds of Sacks’s later affinity with patients undoubtedly in part lies in that experience.

The memoirs reveal that when she learned of his homosexuality his mother said: “I wish you had never been born.” He also writes of a few love affairs, his road trips and obsessional bodybuilding.

Sacks had nearly 1,000 journals and more letters and clinical notes upon which to draw for his autobiography.

When he revealed that he had terminal cancer, Sacks quoted one of his favourite philosophers, David Hume. On discovering that he was mortally ill at 65, Hume wrote: “I now reckon upon a speedy dissolution. I have suffered very little pain from my disorder; and what is more strange, have, notwithstanding the great decline of my person, never suffered a moment’s abatement of my spirits. I possess the same ardour as ever in study, and the same gaiety in company.

“I am . . . a man of mild dispositions, of command of temper, of an open, social, and cheerful humour, capable of attachment, but little susceptible of enmity, and of great moderation in all my passions.” – (Guardian service)