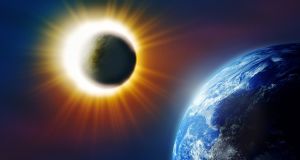 A total eclipse falls on a small but well defined portion of Earth and the researchers used this information to measure the Earth’s current and past rotation. Photograph: Getty Images

If you keep thinking there is a stretch in the evenings these days, it isn’t your imagination, our days are getting progressively longer, by almost two thousandths of a second per century.

Another way to look at this is that the Earth is slowing down resulting in longer days. The world’s oceans are responsible, with the drag of the tides effectively putting the brakes on in a slow and relentless way.

Yet you would be hard pressed to notice the change, given the long timescales involved. But in the context of the birth, life and death of a planet, this slowdown is happening at breakneck speed.

The calculations that revealed the slowdown were achieved by looking at records of past total solar eclipses, said Catherine Hohenkerk, Leslie Morrison and FR Stephenson, who publish their findings on Wednesday morning in the Proceedings of the Royal Society journal.

A total eclipse falls on a small but well defined portion of Earth and the researchers used this information to measure the Earth’s current and past rotation.

This was not all about modern telescopes and supercomputers. The team dug back into ancient times, using details left on clay tablets by Babylonian astronomers and others from ancient China, Greece, the Arab countries and Europe.

The Babylonians kept centuries of astronomical observations of all kinds, writing down the details, including timings of the start, middle and end of eclipses.

The team, after “an exhaustive search of historical records”, were able to find and incorporate astronomical details covering more than 2,700 years up to the present.

“We are not aware of any other eclipse observations before about 720 BC that can contribute significantly to the measurements of the Earth’s rotation in the historical past,” the authors write.

After lots of calculations they determined that the length of a day is increasing at an average rate of 1.8 thousandths of a second per century.

But their findings also triggered questions. “This is significantly less than the rate predicted on the basis of tidal friction, which is 2.3 thousandths of a second per century,” they said.

They believe the difference is due to the rebound of the Earth’s surface after the last Ice Age and to changes taking place deep underground at the planet’s core.