The deal was signed yesterday by Richard Bruton and Stephen Farry 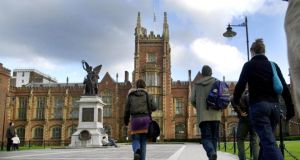 The “Investigators Programme” has been opened up in a collaboration agreement signed between research ministers from both jurisdictions.

Funding will still remain separate with Queen’s University Belfast and University of Ulster researchers drawing down funds from the Northern Ireland Department of Employment and Learning. It will, however, push North-South research collaboration on to a new level.

The deal was signed yesterday by Minister for Jobs, Enterprise and Innovation Richard Bruton and by Dr Stephen Farry MLA, Minister for Employment and Learning in the North.

The new Investigators Programme Partnership will support collaborative research projects arising from open calls from Science Foundation Ireland. These projects are selected by international peer review and are involved in discovery and fundamental research.

Benefits
The deal would bring benefits to the island of Ireland “both socially and economically”, Mr Bruton said. Both jurisdictions had set research activity as a key priority and it was a core issue for the Government’s Action Plan for Jobs, he said.

Dr Farry welcomed the move describing it as a “generous offer of collaboration in such an important and high-profile research programme”.

His department was making almost €10 million available over the next six years to support collaborative projects won by Queen’s and University of Ulster. The next call for proposals will be published by Science Foundation Ireland next month.