Dubbed HD 219134b our newly discovered neighbour is 1.6 times the size of Earth 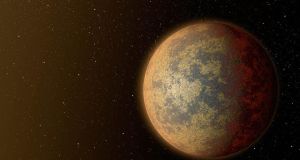 Nasa/JPL-Caltech handout shows an artist’s conception of one possible appearance of the nearest rocky exoplanet found to date outside our solar system. Image: AFP/Getty Images

Astronomers have confirmed the discovery of the nearest rocky planet outside the solar system. Using Nasa’s Spitzer Space Telescope astronomers were able to determine the nature of the planet, estimated to be 1.6 times the size of Earth.

However, scientists say the planet - known as HD 219134b - orbits too close to its star to be able to sustain life.

It is believed to have a rocky, partially molten surface with geological activity, including possibly volcanoes.

The exoplanet is a mere 21 light-years away and has been described by Nasa as “a potential gold mine of science data”. An exoplanet is a planet that orbits a star other than the Sun.

While Nasa says the planet itself cannot be seen directly, the agency says the star it orbits is visible to the naked eye in the Cassiopeia constellation, near the North Star.

It is the closest exoplanet to Earth to be detected crossing in front of its star.

“Transiting exoplanets are worth their weight in gold because they can be extensively characterized,” said Michael Werner, the project scientist for the Spitzer mission at Nasa’s Jet Propulsion Laboratory (JPL) in Pasadena, California.

“This exoplanet will be one of the most studied for decades to come.”

Hd 219134b was first sighted by the Harps-North instrument on the Italian 3.6-meter Galileo National Telescope in the Canary Islands, and a method called the radial velocity technique, in which a planet’s mass and orbit can be measured by the tug it exerts on its host star.

The planet was determined to have a mass 4.5 times that of Earth, and has a three-day orbit around its star.

1 Trump announces clampdown on social media companies
2 Thursday was hottest day of year so far with 26.8 degrees recorded in Roscommon
3 All students will not return to school even if social distancing rules are relaxed – McHugh
4 Miriam Lord: Taoiseach is trapped in a Zoom session from hell
5 What exactly will happen in phase two of easing restrictions?
Real news has value SUBSCRIBE