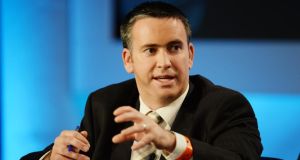 Does Ireland have a future conducting research and making important world-class discoveries?

The answer will depend on success in devising a strategy for building an international reputation for research.

Such a strategy for science, technology and innovation is on the way, and Minister of State for Skills, Research and Innovation Damien English believes it can be delivered by next October.

English has had a rough ride from research scientists, who have been caustic about the State money invested in science over the past few years.

Budgets have been cut and researchers have complained that the Government’s insistence that there must be a return on investment in the form of jobs and new companies has undermined top level science.

It was, perhaps, surprising that when the scientists, along with a wide range of stakeholders, put their views directly to the Minister, an unexpected accord was achieved.

This happened at a “consultative forum” on developing a new strategy held last month at Farmleigh House.

Many scientists went into the meeting spoiling for a fight but it quickly emerged that most parties wanted the same things.

“There was a lot of agreement and nobody held back,” English said during an interview with The Irish Times. “I was very happy with it.”

He says it is essential that as many stakeholders as possible get behind the strategy when it emerges. “I want everybody on board. If we all reach agreement we will win support from the Department of Finance. ”

“This document has to set out where we want to go but can we get the money for it,” he says.

This brings him back to the kind of language that has upset the research community, with the key word being “impact”. Scientists argue that, in practice, achieving impact has meant they must deliver economic benefits arising from what they do, but how does an astrophysicist or a mathematician working in some obscure and difficult area achieve this?

“This sector is so important for the economy,” says English, acknowledging it helps attract multinational companies and supports innovation in the indigenous business sector.

However, he has to show that the funding also supports wider societal impacts, as new medical treatments, as a way to provide trained scientists, as jobs or as spin-out companies.

“You have to convince the people that control the money that this will pay. We need to track the money through the system to ensure we get value for money, we have to show the investment is having an impact.”

However, English says his primary hopes for the strategy are that the policies deliver excellent science carried out by excellent graduates. “The vision has to be one of excellence. If you don’t build a reputation for excellence you won’t succeed. We have to achieve excellence and we have to invent new ways to measure excellence.”

He says he recognises that the existing funding system has drifted out of balance, a concern raised by the scientists.

Money is a recurring theme – which is not surprising given his background in finance – but he does not lack ambition for the research sector. The current State investment is 1.4 per cent of GDP, well below the EU’s Horizon 2020 target of 2.5 per cent.

He notes the national spend on research across all departments has drifted downwards over the financially difficult past few years, from about €930 million to about €730 million.

He would like to see this rising to €1 billion in the next four or five years, “but this also means that industry will be putting in more cash”.

A report on the Farmleigh meeting will be delivered to the interdepartmental committee deliberating on the strategy. English is unsure whether a second similar meeting is needed but he wants more interaction with stakeholders.

“My view is it would be beneficial for us all if we can get out an early draft and judge from that whether we need another meeting,” he says.

In either case we may not have long to wait.

English has set October as a target for delivery of the strategy and believes it is essential to get it published and adopted as policy in advance of the general election.