Is Europe on the verge of demographic collapse?

Birth rates need to be 2.1 to ensure the species does not peter out. But modern life poses a threat to posterity 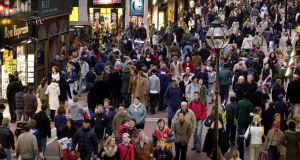 The birth - rate required to keep the population steady (replacement birth - rate) is 2.1 children per woman, and this rate was set as the demographic goal in order to stabili z se population. Photograph: Eric Luke/The Irish Times

A spectre is haunting Europe – the spectre of demographic suicide. Although the consequences of such a turnout could not be more serious, the problem attracts little public attention – indeed, most people may not even be aware of it. And experts can neither explain the cause nor prescribe a reliable remedy. The story is outlined in Population and Public Policy: Essays in Honour of Paul Demeny, published by the New York-based Population Council (2013).

Having too few children is a recent phenomenon. Sixty years ago, people worried about ballooning populations in the developing world resulting from high fertility rates and declining death rates (due to healthcare). The birth rate required to keep the population steady (replacement birth rate) is 2.1 children per woman, and this rate was set as the demographic goal to stabilise population.

War on population
The UN got behind the initiative, Third World governments came on board and contraception was made widely available. Economic development, healthcare and education kicked in and contributed to lower birth rates, but some developing countries implemented drastic measures, such as sterilisation campaigns in India and a one-child policy in China. Although fertility was declining in rich countries, population control really took off.

The goal of achieving global replacement-level fertility is within striking distance. According to UN estimates, the average woman today will have 2.36 children, reduced from 4.95 in the 1950s, and research at the Autonomous University of Madrid indicates that a global average of 2.1 children per woman could be achieved by 2050.

This global 2.1 children per woman is an average figure. Some countries will exceed 2.1 and some will be below. Birth rates in none of the 27 EU countries exceed 2.1. At least 12 EU countries have birth rates less than 1.5 (Spain and Germany are 1.36, and Italy 1.41), although several, including Ireland, are about 2. The rates of childlessness are about 20 per cent among women aged 45 in some European countries. Indeed, more than half the world has fertility rates below replacement level.

Child deficit
The consequences of producing too few children to replace existing adults are extremely serious. Who will do the work, who will pay taxes, who will take care of the elderly, and, eventually, how will the state avoid eclipse? But the real question is this: why is this scenario on the horizon at all? Why would prosperous Europeans not wish to leave a posterity?

This question has stumped the experts and, in the absence of a credible cause, it is extremely difficult to prescribe a solution.

Traditionally, sexual activity, child-rearing and marriage were meshed but the modern pursuit of personal fulfilment and rights has decoupled these activities and it is now socially acceptable to have one without the other two. And traditional marriage, with commitment to a spouse through rough and smooth, coupled with a commitment to sacrifice an easier life for the satisfaction of bearing children, is in serious decline and unlikely to experience a robust revival in Europe anytime soon.

The only suggestions I’ve seen that should make a positive impact on birth rates are measures to encourage women in the workplace to have more children.

Working women
All women in the developed world are encouraged to have careers outside the home. This entails childcare costs that can add up to a large fraction of the mother’s work income. It is also difficult for women to compete with men when so many must interrupt their careers for maybe three or four separate year-long maternity-leave periods. All of this obviously mitigates against working women having babies.

The introduction of pro-natalist policies, such as easily affordable childcare, enhanced parental leave (including paternity leave), career development for working mothers, financial bonuses for children beyond the first child, and the encouragement of fathers to play a more active roles in the home, should all pay off positively in encouraging birth rates. Such policies have had a positive effect in Nordic countries. They are worth trying – look at the consequences of doing nothing.

William Reville is an emeritus professor of biochemistry, and is public awareness of science officer at UCC
understandingscience.ucc.ie