Is Big Brother on the dark side of the smart city? 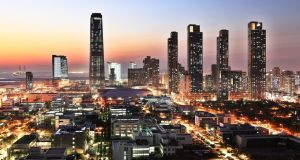 Southwest of Seoul a $35 billion (€32bn) city is being built from scratch. Every inch of Songdo in South Korea has been wired up, with screens for video chat in homes, offices, and shops. Sensors are ubiquitous. Cars are tagged and tracked. Residents track heating and lighting usage in real time and compare it to neighbours. Designed and led centrally, some see sinister reflections of Big Brother.

“You can see this kind of infrastructure being built into cities in places like Singapore and Gulf States. It’s a particular flavour of smart, so about efficiency, security and autocratic,” says Anthony Townsend, US author of Smart Cities, who argues for an alternative vision: “More about enhancing citizen’s lives and experiences and making them more fun, social and with easier participation in government.”

Smart cities use networked, digital technologies and urban big data to tackle a range of issues. An example here is the real-time information at bus stops. The Dublin Dashboard [dublindashboard.ie] provides data such as ambient sound level at various Dublin locations, health and crime stats and motoring times on the M50. “Smart Dublin” co-ordinates various initiatives [smartdublin.ie/] across the capital; Cork has Smart Gateway [corksmartgateway.ie].

“People have been talking about intelligent cities for 20 years,” says Prof Robert Kitchin at Maynooth University, who helps run The Programmable City project in charge of Dublin Dashboard, but smartphones and mobile connectivity have made it a reality for citizens. “It has been partly driven by commercial companies trying to sell new technologies and new services, but increasingly it is coming from cities themselves.”

After the financial crisis in 2008, companies such as IBM, Cisco and Siemens saw a falloff in IT purchasing by companies and a business opportunity in cities. “They took solutions for running big multinational companies and repurposed those technologies to run big complicated cities. It was very much cut and paste exercise,” says Townsend. He worried about how corporate-run smart cities might exclude certain people.

Predictive policing is one example, whereby historical crime stats are used to stereotype certain groups. Townsend also warns against black box smarts that surreptitiously sculpt cities without citizens having a say. “Letting engineers brain storm or decide what the problems are and how to fix them is the easiest way to get into trouble. They have no idea what the problems are,” he says. Certainly, initial smarts in cities involved computational systems for traffic, security and utilities. It had been “conceived in a top down manner and not involved citizens in decision making or design”, adds Kitchin.

Technology has recently empowered citizens in unexpected ways. Smart city security conferences in recent years hosted numerous talks about government or business surveillance of citizens. What they entirely overlooked was citizen surveillance of authorities, such as police shootings. “Your smart phone is a digital Hollywood studio in your pocket,” says Townsend, and this is where surveillance really had an impact.

Initially, cities were bamboozled by technology offerings, but are now setting the agenda. “If you come along now with a fancy bit of technology, cities are unlikely to be hoodwinked into buying it if they cannot see benefits,” says Kitchin. His students are looking at how technologies can facilitate bike shares, smart bins, new energy markets and traffic.

“Smart transportation is the first proof that smart cities are changing people’s lives. Everyone benefits when buses are tracked in real time,” says Townsend. He is upbeat about recent advances, with bits and pieces of the futuristic city scattered around, and praises Dublin’s 2013 masterplan for smart cities.

“We are seeing a shift towards a more grassroots driven vision of smart cities, which is articulated by start-ups, NGOs, crowd source movements, citizen apps and decentralised actors,” he says. Uber is a key player shaping transport in smart cities. Air B&B is another, taking a dead resource and activating it. In Portland, Oregon, a start-up is trying to impact the rental markets, prescreening and then matching tenants to landlords. “Its not rocket science by internet standards, but by housing standards its mind-blowing,” says Townsend.

Data create the evidence base to run cities more efficiently, sustainably, transparently and fairly, yet there are justifiable concerns about privacy. Earlier this year, Kitchin led a government report on this issue, Getting smarter about smart cities: Improving data privacy and data security.

“The dark side of the smart city is Big Brother, with the deployment of so many sensors in the built environment. The problem is they are pervasive and you cannot opt out,” says Prof Mike Batty, a leader in computer models and planning of cities at University College London.

On the upside, the data gathered allows city authorities to plan on shorter time-frames, reacting to our changing lifestyles, says Batty. But there must be a role for social scientists, citizens and policy people in deciding how to do that.

Irish scientists this year deployed a network of sensors along the Dodder River in south Dublin. The 11 sensors differ from some existing sensors. Instead of costing thousands of euros each, these ring in at a few hundred. This can allow for better flood warnings.

“Its hard to know what is happening if you have just a few sensors, but with multiples of sensors you can more quickly see a rise in water levels, which is important in flood warnings,” says Fiona Regan, chemist at Dublin City University’s Water Institute, who led the test project. The sensors, developed by Kingspan for oil tanks not rivers, are battery powered, mobile networked and about quarter the size of a shoebox.

“The lower cost is really important in terms of understanding these sensors as part of a smart city. You need to distribute the sensors widely and in high numbers. That gives better quality information,” Regan explains. She is now in conversation with local authorities about a potential second phase: to put the sensors into underground drains.

“From our perspective, what we do is interpret the data and develop a system of alerts for users,” she explains. Networks of sensors could be beneficial to householders or farmers, with flood warnings accessed via a smartphone. It could help local authorities too. “For coastal flooding, those one tonne bags take time to put in place. Giving local authorities even two hours extra time would help enormously.”

High Court challenge brought over reduction of prisoner visits due to Covid-19 21:03
Number on pandemic unemployment payment up by more than 10,000 in past week 20:59
Gardaí seeking to track movements of man (48) prior to unexplained death 20:50
High Court approves ECT treatment for elderly priest 20:47
UCC to hold virtual freshers’ week despite calls to cancel over Covid-19 fears 20:40