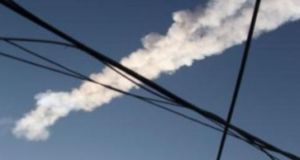 A fireball which burned up over Russia last February generated shockwaves which circled the globe twice. Photograph: www.chelyabinsk.ru/Reuters

An ‘extremely bright fireball’ was seen streaking across Irish skies on Saturday night before breaking up, Astronomy Ireland has said.

The organisation received “lots of reports” of sightings of the meteor which lit up the sky shortly after 9.30pm.

“Fireballs are seen quite rarely, but when they appear on a clear evening when people are travelling from work we often get inundated with reports,” said astronomy Ireland chairman David Moore.

Reports from the public help to “determine the fireball’s path through the sky and find out if it is likely to have ended up on land or in the sea,”Mr Moore said.

Fireballs are very bright meteors caused by larger particles of debris from space, Astronomy Ireland said. They can seem close but occur “ very high up in the atmosphere, approximately 70km and above”, it said.

They disintegrate at altitudes over 50km and occasionally fragments survive and fall to earth, it said.

It urged anyone who saw the fireball to report sightings at astronomy.ie

In February last year a fireball burned up over Russia and generated shockwaves which circled the globe twice.

The asteroid on February 15th broke up above the city of Chelyabinsk about 1,500km east of Moscow leaving more than 1,000 people injured. The event’s shockwaves blew out windows and damaged buildings in several cities.

It was 17 metres in diameter when it entered the atmosphere and travelled over Russia at a speed of about 20km/second.