Ireland losing out because of irrational hostility to GM

Europe is the exception to the general acceptance of GMOs, despite clear evidence of their safety and value 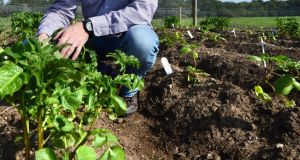 Genetic engineering or modification (GE or GM) allows us, in principle, to purify any gene and place it in the chromosome of any organism, and thus programme that organism to make a product encoded by the gene. It is 40 years since the first GM organism (GMO) was made, 31 since the first major GM pharmaceutical (human insulin) was marketed, 30 since the first GM plant was made and 17 since the first commercial GM crops were released. In the last 40 years GM technology has revolutionised fundamental biology, medicine, agriculture and forensic science.

GMOs are used to produce many powerful medicines, including Enbrel, human papillomavirus vaccine and herceptin, most of which are entirely novel. Ten biotech (GM) production plants now account for a high proportion of Irish pharmaceutical production.

GM has had an equivalent effect on agriculture – outside Europe. Today GM crops are sown on more than 170 million hectares, half in developing countries; they account for 80 per cent of soy and 35 per cent of corn planted. More than 90 per cent of Indian cotton was GM in 2012. New varieties of GM crop are being developed that are pest- and disease-resistant, drought-tolerant and salt-tolerant; others assimilate fertilisers more efficiently; and others are herbicide-tolerant, facilitating no-till farming.

Golden rice
One remarkable project, golden rice, illustrates the power of GM. Rice does not contain enough carotene, from which we make vitamin A. In places where people depend on rice, vitamin A deficiency each year causes 670,000 children to die and 350,000 to go blind. Drs Potrykus and Beyer invented a GM rice that makes more carotene and arranged for the rights to go to the not-for-profit project.

Dozens of authoritative reports have shown that GM is safe and valuable. In 2005 the World Health Organisation concluded: “GMOs offer potential of increased agricultural productivity, improved nutritional values that can contribute directly to enhancing human health and development.”

There is one exception to the general acceptance of GM – Europe. The EU has adopted a highly politicised regulatory system that has made it almost impossible to grow GM crops in Europe. One GM corn is grown widely in Spain. Europe (reluctantly) imports GM food and animal feed, we use GM enzymes in food and drink production but our farmers are not allowed to grow GM crops. While US farmers have benefited by $78 billion (1996-2010), European farmers and consumers have been denied the use of this innovative science for nearly 20 years.

The original reason for opposing GM crops was a concern that they were, or might be, dangerous, to people or animals or the environment. This concern was not sound in the first place and has been shown to be unjustified. More than a decade of research in the EU, US and elsewhere has shown GM plants to be no more risky than conventional plants.

The green movement, to its eternal shame and discredit, set itself against GM, and used every political device possible to incite public distrust of the technology, geneticists and seed companies. Politicians and the media, one group as ill-informed as the other, climbed on to the green bandwagon and Europe paralysed itself with regulations. To this day, Greenpeace “opposes the release of GE (GM) crops, including ‘golden’ rice, into the environment”, an attitude with echoes of Rome’s rejection of Galileo.

A conference was held in October in Dublin by the Environmental Protection Agency on The Regulation and Use of GMO Technology in Ireland. There was a consensus that Europeans need a fresh look at the whole matter. We heard Dr David Heron of the US department of agriculture explain how the US regulatory system was so much more scientific than the European system. Some key differences under US regulations are that “the safety risks of GE (GM) organisms are not fundamentally different from safety risks posed by non-GE organisms with similar traits”; and “regulation [is] science- based”. The EU agricultural policy must be aligned to credible science.

GM rape and corn are widely planted outside Europe. GM sugar beet might be a factor in reviving our sugar industry. For the future we should be working on the discovery and GM transmission of disease-resistant genes for example against ash die-back disease, and rusts in cereals.

Public opposition to GM plants and food is fundamentally irrational, and has been whipped up by activists, including Greenpeace. GM is not high among public concerns – only about 20 of more than 10,000 contacts per year to the Food Safety Authority concern GM.

The geneticist Norman E Borlaug, awarded the Nobel Peace Prize for his work on the green revolution, said: “Farmers across the world must have access to current high-yielding crop-production methods as well as new biotechnological breakthroughs that can increase the yields, dependability, and nutritional quality of our basic food crops. We need to bring common sense into the debate on agricultural science and technology, and the sooner the better!”