Improve your golf game by taking the rough over the smooth

That’s Maths: A dimpled ball is the secret behind the distances players can achieve from the tee 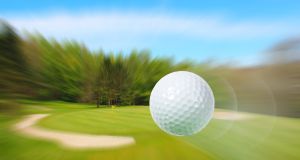 Most balls have about 300 dimples, and hundreds of dimple patterns have been devised and patented. However, the optimal design remains a challenge. Photograph: Thinkstock

Golf balls fly farther today thanks to new materials and mathematical design. They are a triumph of chemical engineering and aerodynamics. They are also big business: about a billion balls are sold every year.

The golfer controls the direction and spin of the ball by variations in his or her stroke. A pro can swing his driver at up to 200 km/h, driving the ball 50 per cent faster than this as it leaves the tee. By elementary mechanics the vertical motion is decelerated by gravity, and the ball should bounce after about 200m and stop a few tens of metres further on.

How come, then, professional golfers regularly reach more than 300m? Gravity is not the only force acting on the ball, and aerodynamic forces can extend the range. In addition to drag, which slows down the flight, there is a lifting force that extends it.

Drag is the force you feel when walking against a strong wind. Lift, the force that enables aircraft to fly, results from the backspin of the ball. Air passing over the top of the ball is speeded up, while air below is slowed. This results – by way of Bernoulli’s principle – in lower pressure above and an upward force on the ball. Lift allows golfers to achieve greater distances.

The character of fluid flow depends on a dimensionless quantity, the Reynolds number. Named for Belfast-born scientist Osborne Reynolds, it determines whether the flow is laminar (smooth) or turbulent (rough).

Normally the drag force increases with speed. In 1912, Gustave Eiffel – of Eiffel Tower fame – made a remarkable discovery, known as the drag crisis. Studying flow around a smooth sphere, he found a drop in the drag force as the flow speed increased above a critical Reynolds number.

The drag crisis extends the range of a rapidly travelling ball, but a smooth ball needs speeds in excess of 300km/h, which are unattainable in golf. So how can the drag crisis help? The answer lies in the dimples. The aerodynamics of a ball are determined by its mass and shape, in particular the nature of the surface. A complex pattern of dimples of varying sizes, shapes and depths influences the air flow around the ball and causes a transition to turbulence at a lower Reynolds number. By roughening the surface, the critical Reynolds number is reduced to speeds within the golfer’s range. The resulting decrease in drag can double the distance flown compared with what is possible with a smooth ball.

Dimples give golf balls greatly enhanced performance. Most balls have about 300 dimples, and hundreds of dimple patterns have been devised and patented. However, the optimal design remains a challenge. How many dimples should there be and what shape and pattern should they have?

Simulation of the flow around a golf ball by solving the governing equations (the Navier-Stokes equations) by numerical means is possible, but it requires hundreds of hours on a powerful computer cluster. Understanding the flight of a golf ball is still a challenge for applied mathematics, with no complete solution in sight.