How to watch the solar eclipse safely: make a pinhole projector

Dos and don’ts during the solar eclipse

While the solar eclipse may not be visible due to cloud cover in the Faroe Islands and beyond, retired US astrophysicist Fred Espenak, otherwise known has 'Mr Eclipse' says it will still be an 'interesting experience'. Video: Reuters

As tourists descend on The Faroe Islands in order to see a total solar eclipse all are hoping for one thing - clear skies. Video: Reuters 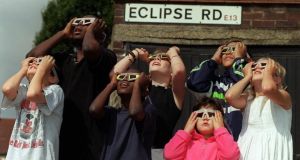 Safety is paramount when trying to observe the sun during Friday morning’s eclipse. It is extremely dangerous to look at the sun directly and people should not take risks.

One of the safest ways to view the solar eclipse is using a simple, homemade pinhole projector

1 Take two pieces of cardboard each about the size of a plate. Two sheets of paper will work but will be harder to hold flat.

2 Use a pin or thumbtack to make a small hole in one piece of the cardboard.

3 Turn your back to the sun and hold up the cardboard, allowing the light coming through the hole to fall on the second piece of cardboard held at arms length.

This will project a clear image of the solar disc as it disappears behind the orbiting moon.

People should also avoid trying to take “selfies” during the eclipse, said Patricia Quinlan, an eye doctor and spokeswoman for the Irish College of Ophthalmologists. A person might be put at risk lining up a selfie on their phones, she said.

Specialised eclipse glasses will be available at some of the public events taking place for Friday’s event.

The eclipse will last about two hours over Ireland, starting just after 8.15am. The eclipse will be at its maximum between about 9.15 and 9.30. However, viewing opportunities may be less than ideal: cloudy and misty conditions, with scattered patches of drizzle, are expected for early morning.

Reopening cultural centres ‘must be a priority’, says Arts Council 21:40
Tánaiste did not ‘instruct’ McEntee to appoint Woulfe 21:31
Judges must be seen to be able to ‘speak truth to power’, North’s Chief Justice says 20:53
Third-level colleges aim to resume more face-to-face teaching early next year 20:49
Government moves to seek reforms as part of new public service accord 20:49