How marginal gains can give elite athletes the edge

When Irish rower Claire Lambe competes in Rio this weekend, her bid for glory will be backed by a wealth of sports science

Rowing Ireland have three boats competing in Rio. It's a tough endurance sport requiring strength and skill. We spend a day on the water with the three women and two men that make up the squad at their County Cork training base. Video: Bryan O'Brien 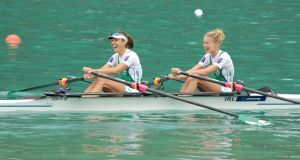 This Sunday, Claire Lambe will row for Ireland in the Rio Olympics. She’s looking to book a place in the semifinals and on then to a six-boat final on August 12th.

As a lightweight rower, her training schedule includes long, exhausting miles as well as hot, sharp sprints, as she needs endurance and power. She and her lightweight sculls doubles partner Sinéad Jennings will cover the 2km race on Sunday in less than seven minutes.

Lambe (26) began rowing on the river Liffey in Islandbridge aged 15. She says UCD’s elite sports Ad Astra Academy – which she joined during its first year and her third year in UCD engineering – was critical to her early development as an athlete. There she benefited from technology and sports scientists.

“I’m a lightweight rower, so body composition is massively important for me,” says Lambe. “At UCD I got full body- composition scans, which gives you percentage body fat and muscle mass composition.” Two X-ray beams at different energy levels return a 3D image pinpointing where she needed or achieved muscle gain. On top of that, she had a nutritionist to assist her and one-on-one training with a strength and conditioning coach. This is crucial.

The philosophy in elite sports these days is tied up in “marginal gains, ” says Colin Boreham, a former Olympian and the director of Ad Astra at UCD, which boasts eight graduates competing in Rio. Attention to detail is typified by Team Sky’s approach in cycling: “They always take their riders’ favourite mattresses and pillows with them on tour, so it guarantees the chance of a good night’s sleep,” Boreham says. A restless night could ruin months of preparation.

“It’s all about marginal gains and analysing the impact of trade-offs,” agrees Stephen Seiler, sports scientist at the University of Agder, Norway. Earlier this month Chris Froome of Team Sky gained a surprise win in an uphill time trial at the Tour de France: he was the only rider to choose a heavier rear disk wheel. Analysts had evaluated the weight costs of the heavier wheel on climbing sections against the aerodynamic benefits on flatter and downhill sections and made a decision that will likely pass on lessons to others.

Tied in with this philosophy of eking out small gains is technology and sports science. This is especially true in team sports, with advanced GPS-enabled monitoring devices tracking position, acceleration, deceleration, impact and recovery from collisions in games such as rugby.

Meanwhile, lab measurements track performance along with physiological measures; for example, tiny blood samples to measure lactic acid, which can signal approaching fatigue. And nutritionists, psychologists, medical doctors, meteorologists and allergy specialists are often on hand to help pursue fractional gains. Some even question if we are reaching the limits of the human body.

Recent analyses by several groups have shown that yearly “top 10” performances in events ranging from sprinting to archery have been levelling off over the past decade. “It seems we are pushing the human body to near maximal potential with modern training practice,” says Seiler.

But Boreham is not so sure. He competed in the 1984 Los Angeles Olympics in the pentathlon and saw his teammate Daly Thompson win gold for Britain. “We assumed that the sorts of performances that he was doing would be almost unbeatable. Now his world record has been broken four or five times. That is the nature of sport,” says Boreham.

What makes for a great athlete? Genes play an enormous role, but not in any straightforward way. “It’s down to combinations of hundreds or thousands of genes,” says Boreham. “Not just for speed or endurance, but willpower, determination, ability to withstand power – all these things will be part genetic.”

The flipside is that it is easy to spot genetic talent simply by measuring performance; for example, hold a 50m race in a primary school and see who sprints away from the rest of the field. It is critical to have a healthy, robust physical education system in Ireland to continue to spot talented athletes, Boreham says.

What a country must do is put in place a system – preferably at primary and secondary school age – to spot talent and nurture it with quality coaching and facilities.

On Sunday, Lambe and her partner will become the first women to compete in lightweight double sculls for Ireland. It’s a long stretch from when Lambe was devastated not to reach the London Olympics. Her aim this time around is clear: an Olympic medal.

USAIN BOLT: WILL ANYONE BEAT HIS TIMES?
The 100m will be one of the major events at this year’s summer Olympics, when the world record-holder, Usain Bolt, looks to retain his gold medal on August 14th. Many sports scientists believe his record of 9.58 seconds is close to what is achievable, which is perhaps around 9.4. But Bolt in so many ways is an unusual sprinter.

“With his longer limbs, and higher overall muscle mass, Usain Bolt has broken the mould by being able to accelerate his larger mass at the same rate as the smaller sprinters, but then have the advantage of longer stride length and much greater distance per stride at near maximal velocity,” says sports scientists Stephen Seiler, who has analysed 100m performances. “The result is that Bolt takes fewer strides in the 100m than anyone else.”

Will anyone beat his times? “I’m pretty confidence that over the next 20 or 30 years someone will come along with even more potential than Usain Bolt and beat the record,” says sports scientist Colin Boreham at UCD.

Unique individuals will still crop up, Seiler adds, as the world population gets larger and more children have access to sports, a healthy diet, medicine, and good schooling.

“There will emerge a larger pool of potential winners in the genetic, demographic and social lottery that is involved in putting the right kid in the right sports environment, with the right mentoring and encouragement to do something truly extraordinary.”