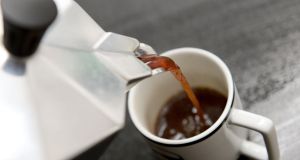 Very hot drinks probably cause cancer, an agency of the World Health Organisation (WHO) has said.

The International Agency for Research on Cancer (IARC) said very hot drinks (65 degrees Celsius and over) probably cause cancer of the oesophagus.

However, it ruled there was “no conclusive evidence” that coffee itself causes cancer or that mate - a caffeine-rich drink typically enjoyed in South American countries - causes cancer at temperatures that are not very hot.

Dr Christopher Wild, director of the IARC, said: “These results suggest that drinking very hot beverages is one probable cause of oesophageal cancer and that it is the temperature, rather than the drinks themselves, that appears to be responsible.”

In 1991, IARC said that coffee is linked to bladder cancer. In its new evaluation of more than 500 studies, it found that coffee drinking had no carcinogenic effects for cancers of the pancreas, female breast, and prostate.

Reduced risks were seen for cancers of the liver and womb. For more than 20 other cancers, the evidence was inadequate to enable a conclusion to be made.

However, the IARC said it could not prove that coffee was “safe”, only that existing scientific data supports the theory that coffee is unlikely to cause certain cancers.

“Our own research analysis found similar evidence for people drinking the South American herbal tea, mate, scalding hot through a metal straw. It is therefore not surprising that this is seen to be reflected in other beverages that are drunk at very high temperatures.

“We will be carrying out further research analysis into hot beverages in the future.

“To all the tea lovers out there, these new findings don’t mean that you can no longer enjoy hot drinks. It is the very hot temperatures that have been identified as a cancer risk and so, when drinking tea or other hot drinks, just let it cool down for a few minutes, especially if you’re not adding any milk.”

National Coffee Association (NCA) president Bill Murray said: “This finding is great news and highly significant for coffee drinkers and confirms evidence from an avalanche of studies by highly respected and independent scientists.”

1 ‘Insane’ gathering of hundreds of students in Galway condemned
2 Prepare for six to nine months of Covid-19 restraints, warn health officials
3 Irish, German and Italian contact-tracing apps to be linked in bid for ‘safer’ travel
4 Speed and distance of Covid-19 droplets tracked by Mater researchers
5 Man unidentified in psychiatric hospital for 30 years may have DNA taken
Real news has value SUBSCRIBE