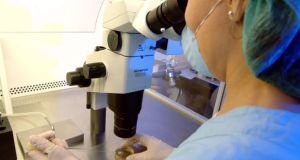 A Petri dish in a laboratory at NUI Galway holds something quite special - hundreds of individual human heart cells all beating in synchrony. File photograph: Science Photo Library/PPX

A Petri dish in a laboratory at NUI Galway holds something quite special - hundreds of individual human heart cells all beating in synchrony.

This is not a tissue sample taken from a heart. These are individual cells grown from stem cells, which in turn used to be skin cells. The cells have been “reprogrammed” to grow into heart tissue.

This is the first time in Ireland that a research group has taken skin cells and turned them first into pluripotent stem cells and then into heart cells.

The heart cells are the real thing, so much so that they can used in test tube trials of new drugs and novel therapies for conditions that cause the heart to beat too fast.

The work is a collaboration between the Regenerative Medicine Institute (Remedi), the Cúram medical device research centre in Galway, and the National Children’s Research Centre at Our Lady’s Children’s Hospital Crumlin.

Funding comes from the National Children’s Research Centre and from Remedi.

Using the reprogramming technology to produce the heart cells is a measure of the capabilities available at Remedi.

“The skin cells become heart cells that beat spontaneously, hundreds of cells that adjust to one another,” said Prof Tim O’Brien, director of Remedi and a principal investigator at Cúram.

The Crumlin research team is led by Dr Terence Prendiville from the department of paediatric cardiology at the hospital and a principal investigator at the Dublin research centre.

The achievement at Remedi is important to him because he studies life-threatening cardiac conditions, some of which involve the heart beating irregularly and too fast.

That Petri dish that holds the cells that can help study the conditions and also test new drugs to control irregular heartbeat, Prof O’Brien said.

“They can be used as a test bed to study the cause of disease and therapies that can overcome them. They can be used in drug discovery and gauging the effectiveness of drugs,” he said.

The research team is focusing on one condition in particular known as “Long QT Syndrome”, one of several conditions that can cause sudden death in young people.

It is asking families affected by Long QT Syndrome to contribute a skin sample on consultation with their doctor so this can be converted into heart cells.

It wants affected and unaffected family members to take part to get a better idea of the genetic causes behind the syndrome.