Have Your Say About Science

Are you concerned about the ethical issues raised by the advance of science? 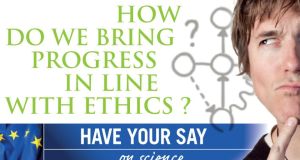 How do we bring progress in line with ethics? New research discoveries come with unforeseen ethical issues, so how do they challenge our norms and values?

Ethics and science is explored in this week’s Have Your Say About Science question, posed by Atomium Culture. It is seeking the public’s view on this and other questions related to science so that your contributions can be taken into account when the next EU science budget, Horizon2020, is finalised.

Embryonic stem cell research, genetically modified foods and human genetic enhancement all raise important ethical questions, and more emerge as new discoveries arise. Some argue that legislation is required to impose controls on research. They say the pace of scientific advance is such that it races ahead of any attempt at creating an ethical framework.

You can contribute to the debate on these issues by having your say on science. The links below will take you to an Atomium Culture web site where you can complete a poll on the issues involved and then debate them with others. Questions include whether you think current ethical regulation and legislation of scientific research (including privacy, data protection and animal testing) is consistent with the needs and values of society.

To join the debate and have your say about science, click here or go to atomiumculture.eu.