Growing more grass could be key to hitting emission targets

Soil under grassland can be used to ‘lock up’ carbon dioxide, says Royal Irish Academy 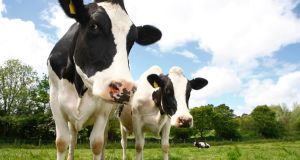 Cattle eat grass and emit tonnes of greenhouse gases, making it difficult for Ireland to meet its international climate-change commitments.

However, growing more grass might provide a way to achieve our emission targets and help slow global warming.

Ireland’s huge livestock population means about a third of its greenhouse gas emissions come from agriculture. The challenge is how to reduce the carbon dioxide and methane releases without having to put limits on meat production. The solution might come down to nothing more complicated than growing more grass.

The soil under grassland has the ability to capture and lock up carbon dioxide, and the Royal Irish Academy believes this carbon-capture could offset the carbon released by livestock.

The academy’s climate change and environmental sciences committee has prepared an “expert statement” on this carbon offset and how it could help bring down our net agricultural carbon footprint.

The problem is there is not a lot of research that proves soil can be made to hold more carbon, says Prof Gerard Kiely, head of civil, structural and environmental engineering at University College Cork. He is the primary author of the committee-approved but as yet unpublished statement.

“There is evidence that grassland soils sequester carbon, but this is not currently recognised when dealing with carbon inventories anywhere in the world. The IPCC [Intergovern- mental Panel on Climate Change] does not accept it,” Prof Kiely said.

The research has been done for forestry but not for grasslands, Prof Kiely said. Without evidence it would be impossible to convince the IPCC to accept grassland sequestration.

Allowing the offset would be a major benefit given Ireland had the largest proportion of land under grass across Europe, said Prof Kiely, who is based in UCC’s Environmental Research Institute.

Ireland has 67.1 per cent of land under grassland, but only 15.2 per cent under woodland and shrubland. In contrast, Sweden is allowed to offset the carbon locked up in the 76.6 per cent of its territory that is woodland or shrubland, thus helping it to achieve emission targets.

“What we feel is that there is potential here [for grassland sequestration] and if properly quantified then Ireland, with its large amount of grassland coverage, would benefit from proving this carbon sequestration,” Prof Kiely said.

There is considerable research from Germany that quantifies grassland carbon offset. Scientists from the Technical University of Munich measured soil “carbon saturation” and found that soils were only holding about half as much carbon as they could.

Their study, Global Change Biology, said that if the soils of Bavaria were able to be pushed to saturation, they would hold about 400 million tonnes. This represents about four times all the greenhouse gases Bavaria releases in a year.

Winning a reversal of the IPCC position on grassland depends on conducting the research to prove sequestration happens and at the correct level, Prof Kiely said.

For this reason he has called for a concerted effort to bring research to bear on the questions involved. This would require “a national effort of soil carbon monitoring across the country for a period of years”.