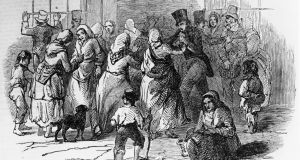 Crowds outside a government depot in Cork, Ireland, where Indian corn is being sold by the British government, 1846. File image: Illustrated London News/Hulton Archive/Getty Images

Scientific evidence of starvation has been extracted from the teeth of people who died in the Famine in the 19th-century.

It is the first time analysis of the stable isotopes of nitrogen and carbon in human teeth has been used to establish markers for starvation.

Some of the individuals studied by Julia Beaumont of the University of Bradford and Janet Montgomery of Durham University had survived earlier periods of famine before the Great Famine of 1845-52, when the Irish potato crop on which the poor were dependent totally failed in successive years.

Others died of malnutrition after trying to survive on a diet of imported American maize, the main ingredient distributed in food aid, and used for most workhouse meals.

The researchers’ analysis suggests that the changing levels of nitrogen and carbon have been wrongly interpreted in the past, when they were seen as indicators of a high-status rich diet.

In fact, their grim discovery is that it is really evidence of body tissue breaking down and being recycled, as the starving human literally consumes itself.

“We’re seeing evidence here of the body virtually eating itself as starvation gets a grip,” Ms Beaumont said.

“When the potato crop was good, the evidence is that the people’s diet was remarkably good.

“The maize was also potentially a useful foodstuff, but the problem was cooking it properly and for long enough to make it nutritious - in Mexico lime juice is used to help break it down, but of course in Ireland there was no knowledge of that, and no way to make use of the information if they had known,” she said.

The lime juice would also have helped prevent scurvy, which afflicted many of the Irish as a result of their new diet, which was severely deficient in vitamin C.

The bright yellow maize was first imported under prime minister Robert Peel, and was so loathed it became known as “Peel’s brimstone”.

The work is published this week in the journal PLOS ONE, and has wider applications than unpicking one of the greatest disasters in Irish history, in which an estimated one million people died of starvation and disease.

Ms Beaumont said it could also allow new insights into both archaeological finds and current investigations.

The samples of teeth and bone used in the study came from children and adults buried in a well-documented famine burial ground in Kilkenny.

The graveyard, excavated 10 years ago, held the remains of almost 1,000 people who died in the Kilkenny Union workhouse, either during the Famine or shortly afterwards, and were buried in mass graves.

“Such data from people who were nutritionally deprived to such a degree is extremely rare,” the academics write, “and the opportunity to use their untold stories is of significant import for the assessment of both modern and ancient individuals, where nutritional stress may be suspected and soft tissues are not available.”