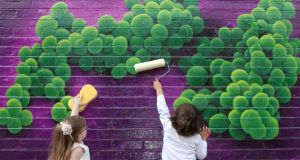 The notion of the “jumping gene” that hops from one species to another has been known since the 1950, causing for example antibiotic resistance that helps superbugs like MRSA to survive. File photograph taken from the Dublin City of Science 2012 initiative.

It was a seriously tough neighbourhood back when the earth was young. It was a smash and grab world where if one species didn’t have the genes it needed to survive it just stole them from a neighbour, according to new research.

The findings are going to force a rewrite of how evolution works, says NUI Maynooth’s Prof James McInerney who was part of the team along with scientists from Germany and New Zealand.

“It completely changes the textbook standard models for evolution,” he says. “Evolution does occur but we have now discovered it is much more fantastic than before, it is awesome.”

The standard model says that most new traits emerged in early microorganisms primarily through mutation, spontaneous changes that either helped survival or caused death.

Not so the researchers found. Genetic changes in these primitive organisms called the archaea and the eubacteria were more likely to occur by stealing genes from one another. This “horizontal gene transfer” in turn caused evolution to occur by sudden large leaps and bounds and not just by mutation of a single gene, they write this afternoon in the journal Nature.

“There were significant flows of genes from one species to another. There was a constant borrowing and stealing of genes between species,” Prof McInerney says.

The notion of the “jumping gene” that hops from one species to another has been known since the 1950, causing for example antibiotic resistance that helps superbugs like MRSA to survive, he said. This is completely different however.

The scientists used powerful computers to search back through the genetic changes that took place in these early organisms. This showed when genes suddenly arrived to deliver new traits.

Most of the theft was perpetrated by the archaea, with this group of microorganisms five to 10 times more likely to take genes than the hapless eubacteria, but it was a two way flow cutting both ways.

Gene sharing like this couldn’t help a rabbit sprout wings, but in these simple cells that didn’t even have a nucleus horizontal gene transfer was the way to go. “If your neighbour started to use photosynthesis you might hope to evolve it over time but it was just easier to grab the genes and start photosynthesis immediately,” Prof McInerney says.

Their study showed the mechanism is “hugely important” to help explain how evolution proceeded during the development of life on our planet, he says.