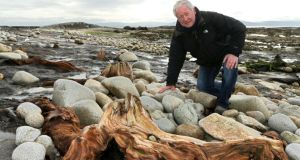 Prof Michael Williams with some of the 7,500-year-old tree remains at a drowned forest site exposed by storms in Co Galway. Photograph: Joe O’Shaughnessy

When Michael Williams, geology professor at NUI Galway, discovered evidence of a 7,500-year-old drowned forest on the northern shores of Galway Bay, he couldn’t have anticipated the huge public response.

Over the last few weeks, low tide has lured hundreds of people out to view, photograph and play around the prehistoric tree stumps with their extensive root systems, which Prof Williams knew to be there and which were exposed in dramatic fashion by this year’s storms on the west coast. A track revealed below the peatline suggests human habitation and adaptation to sea level rise up to 4,500 years ago.

Even as the debate continues as to whether the recent extreme weather is direct evidence of climate change, the transformation of such forests and lagoons into what we now recognise as Galway Bay many thousands of years ago is evidence that such change is nothing new, contends Prof Williams.


Latest UN report
The most recent UN Intergovernmental Panel on Climate Change (IPCC) study, released in late March, found that the effects are already being felt on global food supplies, and contributing to the frequency of natural disasters and conflict. It has also highlighted the ill-preparedness of governments. However, Prof Williams believes we have learned to adapt to such change in the past, and such adaptation has influenced human evolution.

“That forest drowned because of weather,” he says. “It was flourishing 5,000 years ago and then the climate in the north Atlantic changed. It became cooler and wetter, and the sea level began to rise. The forest floor became carpeted in reeds, including phragmites, which we can still see traces of, and which can tolerate semi-saline conditions.”

Prof Williams estimates that sea level would have been at least five metres lower than it is now, and the forest floor eventually succumbed to rain and rising sea. And so, the Neolithic people living off the lagoons and forests, among bears and wolves, had to move. This is because, he says, the Earth behaves in cycles, with climate change an integral part of this.

“What would the Earth be like if the climate never changed, if temperatures remained the same all over the planet, sea levels never rose or fell, carbon-dioxide levels in the atmosphere remained constant?” he asks.

“For example, the eruption of Krakatoa in 1883 reduced global temperatures by over one degree, and it took another five years for climate to return to normal. This was not a super large volcano by geological standards. All the plates of the crust are in constant motion, so parts drift north or south into warmer or colder climates.”

Some would argue that human evolution “would not have even begun were it not for climate change”, says Prof Williams. “Africa suffered increased aridity at various times over the past couple of hundred thousand years, which led to changes in lifestyle from tree-dwelling apes to grassland-living hominids.

“Not only is climate change inevitable, but if we examine past climates which have existed on Earth, we see that at present the Earth is cooler, sea levels are lower and atmospheric levels of carbon dioxide are less than they have been for most of Earth history, “ he says, reviewing some “snapshots in deep time” (see panel).

“Carbon-dioxide values were up to 23 times those of the present day some 2,200 million years ago,” he adds.

His graph of sea-level variations over the past 450,000 years points to at least five instances when sea levels were higher than today. So we can expect sea levels to rise another 10m-20m, over the next few tens of thousands of years.

However, the isotopic composition of carbon-dioxide relates to volcanic emissions and fossil fuels, he notes, and one is “indistinguishable” from the other. He refers to a 2007 UN IPCC report that said “only in the case of complete elimination of emissions can the atmospheric concentration of carbon dioxide ultimately be stabilised at a constant level”.

“Since we are the ultimate in animal adaptation, humans must continue to adapt,” he says. “Education and planning for an uncertain future is a substitute for panic and the spending of billions in funds to temporarily defer the inevitable. Instead, why not use the funding and our ingenuity to plan for future environmental changes?”

ABIL ITY TO ADAPT: A CENTRAL ISSUE FOR HUMANS

Ireland still has examples of tropical weathering dating back some 65 million years, including Pollaphuca, near Headford, Co Galway, which has traces of lignite, a type of proto-coal formed in a hot, wet environment.

In Toormakeady, Co Mayo, basalt can be found below layers of bog and grave, and it has been so weathered that it has become sand, says Prof Michael Williams. Average global temperature have fallen by some 12 degrees since then, he says.

Research published in 2006 estimates that carbon-dioxide values were up to 20 times those of today in the Cambrian period, some 550 million years ago.

By the time of the early Ordovician period, 480 million years ago, ocean temperatures were about 10 degrees higher than today, and by the Cretaceous period – sometimes known as the “greenhouse world”, 100 million years ago – oceanic waters reached temperatures of 20 degrees in their mid-depths, compared with between four and five degrees today.

The Pleistocene period, which began about 1.8 million years ago, and includes what we term the Ice Age, has “the best-preserved evidence for such changes”, he says. It was “not a period of unremitting glacial advance”; rather, great ice sheets advanced and retreated in response to changes in the Earth’s orbit around the sun.

“Rapid climate changes occurred, some by as much as 16 degrees, in time frames as short as decades,” he says, and we are living in one such interglacial stage now. “Even if industrial development had not occurred, the Earth would still have warmed since the last ice retreat 11,000 years ago.” And while the human footprint contributed to that, human ability to adapt is what he believes to be the central issue now.