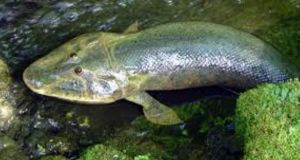 A model of the Tiktaalik, a 375- million-year-old freshwater creature that grew to three metres long and had aquatic features mixed with others more suited to life on land. Photograph: University of Chicago

The fossilised remains of an ancient beast have revealed how prehistoric life hauled itself from the water and took its first unsteady steps along the path that led to four-legged land animals.

Clues to the seminal moment in the history of life were found in the bones of Tiktaalik, a 375- million-year-old freshwater creature that grew to three metres long and had aquatic features mixed with others more suited to life on land.

Scientists first discovered Tiktaalik in 2004 while hunting fossils on Ellesmere Island in the Canadian Arctic. Its extraordinary blend of gills, scales, fins and lungs, combined with a movable neck, sturdy ribcage and crocodile-like head, placed Tiktaalik halfway between fish and the earliest four-legged land animals.

In work published yesterday, researchers describe fossils of the back half of Tiktaalik for the first time. The report shows that the animal had a large, robust pelvic girdle, a prominent hip joint and long hind fins. The powerful fins could have propelled the beast in the water, but also helped it walk on riverbeds or scramble around on mudflats.

Surprising pelvis
Neil Shubin, professor of anatomy at the University of Chicago and the first author on the paper, said the most surprising find was the size of the pelvis.

“To give you a sense of how giant it is, the pelvis of this animal is the same size as the shoulder, so it’s very clear from understanding these bones that the hind appendage was already being emphasised in the transition to creatures with limbs,” he said.

Prof Shubin had expected the hind fins and pelvis to be small in animals like Tiktaalik, with rear limbs becoming stronger and more prominent only as animals adapted to life on land.

“It turns out that the size of the hind appendage was already large in fish and that a good chunk of the transition has already happened in fish before the origin of tetrapods.”

The latest findings are based on the fossils of five Tiktaalik specimens recovered from Ellesmere Island in Nanuvut, northern Canada. The scientists have yet to find a Tiktaalik hind fin bone, or any remains that might shed light on the origins of toes. “The hind fin of Tiktaalik is tantalisingly incomplete,” Prof Shubin said.

Details of the fossils are reported in Proceedings of the National Academy of Sciences.

Jennifer Clack, professor and curator of vertebrate palaeontology at Cambridge University Museum of Zoology, said the fossils answer a long-standing question about life’s transition from water to land.

“There has been a big gap in our understanding of how it happened, because the fossils did not provide any good evidence. This new material is just the sort of thing we hoped to find,” she said.

“The development of a large pelvis had to happen somewhere in the transition, and given its other tetrapod-like features, it’s no great surprise – but very satisfying – that the beginnings of it can be seen in Tiktaalik,” she added.