For bats, love is blind – and increasingly loud 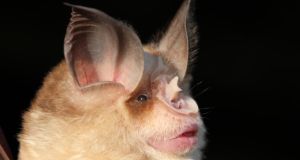 Rhinolophus mehelyi in northeast Bulgaria: in a study, the males had echolocation calls 30 kilohertz higher than the range expected for bats of this size. Photograph: Sebastien Puechmaille

Love at first sight is nice when you want to find a partner, but pity the lovelorn bat. It has to find the love of its life in complete darkness and make a choice on the basis of sound alone.

This means bats aren’t looking for a good mate: they are listening for one, says Prof Emma Teeling, director of the Centre for Irish Bat Research at University College Dublin. She and colleagues in Germany recently provided the first hard evidence that bats use their echolocation systems as a way to find and identify suitable mates.

Teeling is a world authority on bat genetics but she relied on ecological and behavioural studies as well as genes to show that female bats were making choices on the basis of how a male sounds. The higher the pitch the more the females like it, according to the results of the study, published in Plos One of which Teeling was the senior author.

The work also highlights a possible evolutionary cul-de-sac, given that this sexual rather than natural selection has the potential to select male bats with higher- and higher-pitched calls rather than bats that are healthy and would make sound genetic partners, says Teeling.

This evolutionary change is apparently already under way in a colony of horseshoe bats, Rhinolophus mehelyi, the researchers studied in Bulgaria. The males have echolocation calls that are 30 kilohertz higher than the range expected for bats of this size.

“The bigger the bat, the lower the call, based on the size of vocal cords, but these guys were 30 kilohertz too high,” says Teeling. “We wanted to know what was driving that: was it female mate choice playing a role?”

In part, their determination to get to the bottom of this arose 10 years earlier when lead author of the new paper, Dr Sébastien Puechmaille of the University of Greifswald in Germany and she were studying bumblebee bat colonies in Thailand and Myanmar. The Myanmar bats had a much higher-pitched call, usually a clear sign that this was a distinct bat species, but they seemed identical to the Thailand colony.

They could find no direct genetic connection between the two, and it looked as though natural selection had made the pitch of the Myanmar bats go higher. But having a higher-frequency call was assumed to be a major disadvantage, something that natural selection should have worked against. “The problem is, echolocation calls are used by bats for finding food and navigating the environment they live in,” says Teeling.

The higher the frequency, the shorter the echolocation call range. “They need sound waves to go far, so lower frequency is better. Basically they can ‘see’ farther.

“We were driven a bit mad by this. Most of the data said that echolocation calls were playing a role in mate choice, but we had not been able to prove that.”

Until now, that is. Their work at the German field station in Bulgaria, which added the efforts of co-author Dr Björn Siemers of the Max Planck Institute for Ornithology, brought more technologies into play. They caught bats with higher-pitched calls and assessed them for fitness, showing that despite their high-pitched calls they were “big and strong”, says Teeling. “They were able to overcome the [high-pitch] handicap like a peacock and its large tail.”

They set up speakers and played the male calls to females to gauge their response. “The females preferentially flew over to the speaker that played the higher frequency.” They also did genetic fingerprinting, effectively asking “who’s the daddy?” and finding that the bats most successful at passing on their genes were those with higher-pitched calls.

This demonstrates the conflict that can arise between natural and sexual selection, says Teeling. “Ultimately this is a potential conflict, this battle of the sexes, with the females choosing for a thing that is not good in a male. But he can overcome this and still pass on good genes.”

She believes that this study of the role of sound in mate choice will become a reference for future studies, and opens up many new avenues of discovery. She wants to learn whether having a high-frequency echolocation call really does cause a disadvantage for male survival like the tail on a peacock or the heavy multi-point antlers on a stag. The bats may be overcoming whatever negative aspects there are to remain fit genetically.

It will also contribute information about how sexual selection can drive the creation of new species of animal once a colony is separated from its former peers.

FEVER PITCH: WHAT SOUNDS GOOD TO A BAT?

Knowing that sexual selection in some bats is based on their echolocation calls makes zoologists wonder what other information might be available, both in calls themselves and in the sound waves that bounce back to the sharp-eared bats.

No other animal can hear with the sensitivity of a bat. Echolocation calls may also carry encoded information on a whole range of attributes, says Prof Emma Teeling of University College Dublin.

Bats need a different way to find a mate than, say, humans, given that their courtship rituals all take place in darkness.

A bat can’t see what a potential mate looks like: it has to rely on echolocation calls to confirm sex, body size, age, fitness and other characteristics.

Prof Teeling’s study is also telling us something about speciation: the evolutionary process that causes new species to arise.

Evolution has shown us that new species may arise when a barrier forms to block the flow of genes across members of a colony.

Smaller groups may become separated from the rest, for example by being blown by a storm to a new location or by some change to their environment.

Natural selection will continue to act on the group, supporting the evolution of characteristics that help the colony to survive.

Over time the changes will become so marked that the separated group will form a distinct species than that from which it originally arose.